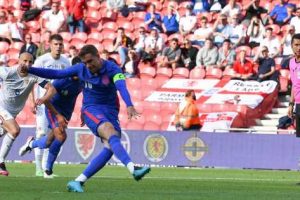 Jordan Henderson was selfish leading up to the Euros and has slipped behind Jude Bellingham in the England pecking order.

Henderson was wrong to nick a penalty off Dominic Calvert-Lewin in the Romania game and made it worse with his interview afterwards.

He said he wasn’t bothered it was saved. Well if you’re not bothered when you miss, don’t take it!

It was like he wanted to send a message out saying: ‘I’m the senior player here!’

But when you’ve played that many games for England you should be thinking of others and putting the team first .

We might need Calvert-Lewin at the Euros. God forbid but if Harry Kane gets injured he might be starting.

So we’re better off with Calvert-Lewin taking that penalty, scoring, and building up his confidence going into the tournament.

Henderson should be thinking of the team, not putting himself first. That was selfish. One hundred per cent.

I understand why Gareth Southgate has picked Henderson. His fitness is in doubt but he’s an experienced player who has win big trophies.

He’s a talker and we don’t have many of those. You need those types when you’re on the ropes in a game, to calm you down.

I can see this team conceding and then trying too hard to chase a game and letting in another one very quickly.

So his leadership could be important. But he wasn’t showing good leadership with that penalty.

Should either Jude Bellingham or Jordan Henderson start for England at Euro 2020? Let us know in the comments section.

I think he’s behind Bellingham now. I think sooner or later this kid will play in the tournament – and he will be a star.

I think he’s outstanding. And against the best teams in the tournament we’re going to need more insurance in front of our defence.

Bellingham gives you that. He has more energy than Henderson. More legs. And he’s so composed and confident you’d think he’d played 500 games already.

I’ve never seen anything like it in a kid of his age. I’m a massive fan of his. I’m so impressed.

Against the best teams in the finals, we won’t get away with playing Declan Rice and Mason Mount in midfield. Or Rice and Henderson. We’ll get overrun.

But stick Bellingham in there and he solves that problem. He’s a real all-rounder, and he’s ready. He’s proved that in the Champions League with Borussia Dortmund.

The England team that starts this tournament won’t be the one that ends it. Someone on the fringes at the start will end up being a hero.

It could be him. He is going to get a chance, even if he doesn’t start against Croatia.

And I think he will take it. I would have no problem starting him against Croatia at all.

It’s so important to get off to a good start. Win your opening game and you’re in the next round in my opinion.

But we should absolutely be worried about Croatia. They are a good team with movement, pace and guile.

They have experienced players. They will keep the ball and make us run. England’s players should be prepared to run themselves into the ground here.

The biggest problem for Gareth Southgate at the Euros is the England players who are NOT getting a game.

You can’t have players sulking if they’re not in the team because you get negativity hovering around the camp then.

The players who don’t play are just as important as the ones who do because their attitude makes all the difference.

Players really feel that negativity when people are moping around. That one person who sulks can ruin it for everyone.

But I don’t believe in breaking up cliques in the squad. When I played for England, all the Manchester United players used to sit together but it was never a problem.

They were just good mates. Sometimes that kind of thing gets blown out of proportion. Just make sure the players are comfortable and happy.

Don’t break up close friends and force people to sit with someone else. Just let them get on with it.

Cliques are not the biggest issue. It’s the players who are not in the team that you have to manage properly.

Switzerland are my dark horses at Euro 2020. I think they will be a real surprise package.

I would have said Portugal but I think they’re already part of a big six with France, Spain, Italy, Germany and Belgium who will be our big rivals to win it.

People think the Swiss are no-hopers but I think they’re in for a shock.

When you see them play you will be surprised that you know and recognise most of their players.

They dismantled Germany at times in a 3-3 draw in the Nations League last year as well – and they have quality players with loads of experience in the team.

They could spring a big surprise.

But it’s hard to look beyond the big six and England for the winners. We definitely have a chance.

If we play the kind of high-tempo, Premier League football we’re good at, no-one can live with us.

READ MORE: 10 young stars set to light up Euro 2020 including the unknown name who rejected Liverpool