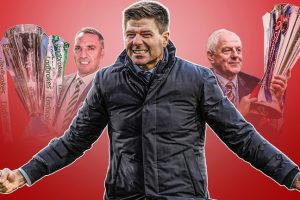 Rangers won their 55th top-flight league title on Sunday, meaning they have won more league trophies than any other club in world football.

The Ibrox club were level alongside Northern Irish side Linfield, on 54 titles, before moving one clear of the team managed by former Rangers player David Healy.

Linfield could draw level with Rangers if they win the Irish Premiership this season but Steven Gerrard’s side are now four titles clear of rivals Celtic who have lifted the league trophy 51 times.

Rangers have now won 55 league titles, 60 domestic cups and one European Cup Winners’ Cup meaning they’ve secured 116 major trophies, the most by any club in Scotland, with Celtic their nearest challengers on 111 trophies.