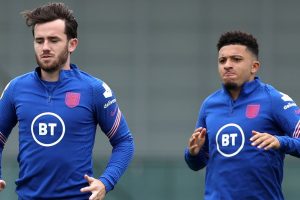 Jadon Sancho and Ben Chilwell are two surprise absentees from England's squad for their Euro 2020 opener against Croatia at Wembley.

The Borussia Dortmund winger and Chelsea left-back will play no part of the clash in London this afternoon.

And most notably is his decision to play natural right-back Kieran Trippier on the left of his four-man defence.

Manchester United left-back Luke Shaw is fit and on the bench, but Atletico star and 2018 World Cup hero Trippier has got the nod ahead of him.

One posted in reply to England's Twitter post announcing the line-up: "Someone please explain to me why he couldn’t play shaw or Chilwell at left-back and we have to play a right back there?"

Another replied: "He actually started Tripper at left-back".

And a third put: "Shaw? Chilwell? Grealish? Trippier at LB? Southgate has lost the plot."

Should Kieran Trippier be England's first choice at left-back? Let us know in the comments section.

He is still working his way back to full fitness from an ankle injury suffered for Manchester United in the Premier League away win at Aston Villa back on May 9.

Maguire is in a race to return in time for England's third group stage match against the Czech Republic next Tuesday, but even that could prove too soon.

Chilwell and Sancho's absences have come as a surprise, though.

And both would have liked to think they stood a real chance of being in the starting XI for today's game.

Ex-England winger Chris Waddle was astounded and said: "I don't get it. Luke Shaw's had a great season for Man Utd. He got himself in the squad and we all thought he was going to start ahead of Chilwell especially in a back four.

"I don't see the reasons. I don't get it. Is it tactical in some reason? I don't see why he needs to play a right-footed left-back. There is a reason and I'm sure he'll explain why but for me, it's bizarre."

READ MORE: How England have performed in European Championship opening games ahead of Croatia clash

READ MORE: England fans slam Gareth Southgate's line up as Trippier and Grealish decisions are made