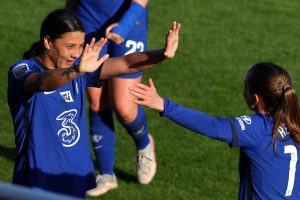 A double from Matildas captain Sam Kerr has put Chelsea on the brink of retaining the English FA Women’s Super League title.

Kerr’s overnight brace, which took her WSL season tally to 20, secured the Blues a 2-0 away win over London rivals Tottenham.

“It’s always hard to come away and score the first goal plus there was a lot on the line. It was a big goal for us and it was nice to get it just before half-time.

“More importantly, we’ve got to win the league on Sunday, and that’s the most important thing to me.

“We’ll deal with all that type of other stuff after.”

Kerr scored in the 41st and 52nd minutes in a Chelsea performance that satisfied manager Emma Hayes.

“It’s a job done and credit to the whole squad for getting another win for us,” Hayes said.

“I think at 0-0, with the number of chances we missed, I was always a little conscious that a set piece would change something.

“I thought the timing of the first goal came when we needed it, you don’t really want to come in to half-time at 0-0 but that settled everybody.

“The message was to build on being in front and consolidate it.”

Kerr’s side has also qualified for the UEFA Women’s Champions League final.

“We’ve got two massive games to come and we want to win it all,” the former Perth Glory striker said.