Mohamed Salah has tested positive for COVID-19 and started a period of isolation, adding to Liverpool manager Jurgen Klopp's problems during the international break.

Klopp lost Joe Gomez to a long-term knee injury when the centre-back was injured in England training last week. He now faces being without Salah for this week's Premier League clash against leaders Leicester City.

Salah has no symptoms, but tested positive for coronavirus while on international duty with Egypt and is set to stay in Cairo this week. The 28-year-old was pictured on social media at his brother's wedding days before joining up with his country. 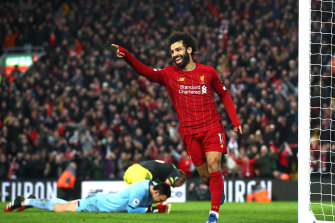 Mohamed Salah has tested positive for COVID-19 while away on international duty. Credit:Getty Images

"The medical swab conducted on the mission of our first national football team showed that our international player, Mohamed Salah, the Liverpool star, was infected with the coronavirus, after his test came back positive," a statement from the Egyptian Football Association read.

"The player does not suffer from any symptoms. The other members of the team tested negative. Salah underwent the medical protocol after the team's doctor coordinated with his English club. In addition to his isolation inside his room and also isolating all his contacts."

Salah scored in Liverpool's draw against Manchester City last weekend before leaving for Egypt for Africa Cup of Nations qualifiers against Togo, where he underwent tests with the national team doctor.

Premier League protocol means he faces 10 days in isolation, so is set to miss the clash against Leicester and will be tested ahead of the Champions League fixture with Atalanta.

Liverpool already had Trent Alexander-Arnold pull out of England duty, joining Thiago Alcantara in the treatment room. Virgil van Dijk is a long-term absentee and Alex Oxlade-Chamberlain is also sidelined.

Last week, Klopp called for FIFA to allow clubs to withdraw players from international duty when COVID-19 protocols with their countries are unclear. Sadio Mane, Thiago and Xherdan Shaqiri have returned positive tests this season, while Naby Keita was locally reported to have the virus during last month's break from club football. 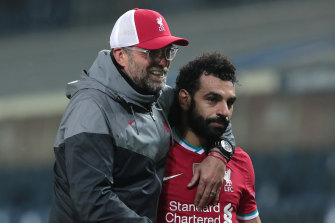 Jurgen Klopp, left, may be without Mohamed Salah for Liverpool’s clash against Leicester City. Credit:Getty Images

"We tried to find out what all the different protocols, but it's up to the FAs to answer or not," Klopp said. "And FIFA so far is not really involved in that. It would be a massive help that if you don't get a reply from an FA, then you don't send the player because then you would get replies."

Meanwhile, the Ukraine Football Association has reported five cases of the coronavirus, one day before its national team's Nations League game against Germany.

Players Andrii Yarmolenko, Serhii Sydorchuk, Viktor Kovalenko and Viktor Tsyhankov, and staff member Vadym Komardin all tested positive. The association said they remained isolated in their hotel rooms while the rest of the team trained. Ukraine could still call on 17 outfield players and four goalkeepers for the game.

Elsewhere, Uruguay's Edinson Cavani scored early and fellow striker Luis Suarez converted a second-half penalty, his fourth in three games for his country, as they beat Colombia 3-0 in their World Cup qualifier.

The victory took Uruguay to six points after three games, while Colombia, who beat Venezuela and drew away to Chile in their first two games, have four. The top four sides in the 10-team South American group qualify automatically for the Qatar 2022 finals and the fifth-placed team goes into an inter-regional play-off. Uruguay now travel home to face Brazil this week when Colombia will be away to Ecuador.