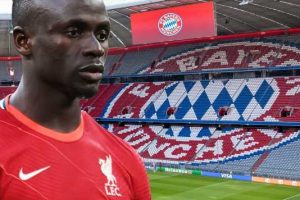 Sadio Mane is set to spark panic among Liverpool supporters after confirming he will announce a decision over his future after the full-time whistle of Saturday’s Champions League final. The forward is out of contract at Anfield at the end of next season and is strongly linked with a move to Bayern Munich.

Mane said earlier this week he would not discuss his future until after the final. And now he has promised he will put an end to speculation this weekend.

The Senegal star told reporters: “Honestly I think the answer I can give you now is I feel very good, and I am fully focused on the Saturday game, that is the answer I must give before the final. But come back to me on Saturday and I will give you the best answer you want to hear, for sure.

“It’s special. I will give you all you want to hear then.

Mane has been an instrumental figure in Liverpool challenging for the quadruple this season. He is the club’s second-leading goalscorer in all competitions with 23 strikes to his name.

Liverpool are aiming to win their seventh European Cup and Mane his second Champions League trophy during his spell at the club. Opponents Real Madrid have also been linked with the 30-year-old former Southampton star.

Mane was asked what would happen if Real made an approach for him. He laughed, and responded: “Haha, good question, but what I want to say now is I am fully focussed on the Champions League and winning it.

“That is far more important for me and the Liverpool fans, for me I will do everything absolutely possible to win the game for Liverpool. Then we will talk.”

There is also doubt over the long-term future of Mohamed Salah. But the Egyptian insisted he will at least be at the club for next season.

Salah said: “I’m just focused on the team and winning the Champions League again. I want to see Hendo [Jordan Henderson] with the trophy in the hands and hopefully he gives it to me. I don’t want to talk about the contract now, I’m staying next season for sure, that’s clear.”