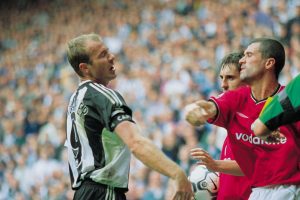 Today marks 20 years since a scuffle between Roy Keane and Alan Shearer in a match at St. James' Park saw the Irish midfielder receive his marching orders.

As Manchester United trailed 4-3 in the closing stages of the Premier League fixture, Keane intentionally threw the ball at the Newcastle United forward instead of taking a throw in.

As Shearer stoked the fire, Keane failed to control his temper and as he pushed Shearer's face with a swing-cum-shove, he saw his yellow card for the ball throw upgraded to a red.

This was one of 10 instances where Keane was sent off in his career, all came while playing for United.

After being sent off, Keane reportedly waited for Shearer in the tunnel with just minutes left in the match and had to be dragged into the United changing room after the match.

Shearer was not the only player Keane has come to blows with in his career as a manager, player and coach so here are seven of his biggest bust-ups.

Back on September 15, 2001, Shearer became the latest player to wind up the temperamental United captain and earned the reaction he desired from the Irishman.

Keane, however, has since reflected on the incident that saw him sent off for a swing that turned simply into a push to the face.

“You might as well be hung for a sheep as a lamb. That’s what I was thinking afterwards. It was just a push. It was ridiculous.”

For most of their Premier League careers, Keane and Patrick Vieira captained United and Arsenal as the two clubs regularly battled for the title.

Their rivalry came to a head when the sides met at Highbury in 2005 and Keane snapped at Vieira in the tunnel as the teams prepared to come out onto the pitch.

Angered by Arsenal players appearing to 'bully' Gary Neville, Keane pointed and shouted at Vieira as he approached his opposite number.

The altercation did not become physical, with referee Graham Poll speaking to keen and calming him down before the players walked out.

Keane never saw eye to eye with Mick McCarthy, both during their time as international team-mates or when McCarthy was manager of the Irish national team.

This uncomfortable relationship led to the infamous incident of Keane being sent home from the 2002 World Cup in Japan and South Korea.

Keane had originally been angered by the quality of the pitches at the clubs training camp and the organisation of the Irish FA.

After airing his grievances to the press, McCarthy challenged Keane in front of the squad, leading Keane to launch a verbal attack on his manager that resulted in him being removed from the squad.

Ferguson was left fuming with an interview Keane had done with the club's in-house TV channel, MUTV, where he had heavily criticised his team-mates.

Keane was particularly critical of Rio Ferdinand, John O'Shea and Darren Fletcher in footage that was never aired on TV and left the club two weeks later.

The Irishman later apologised to Ferguson for the incident, but has since gone on to say "Now I kind of wish I hadn't."

Keane was sent off for a horror tackle on Alf-Inge Haaland during the Manchester derby in 2001, catching Haaland halfway up his leg with studs showing.

The tackle was seen at the time as an act of revenge by Keane after Haaland had mocked him when he suffered a cruciate ligament injury four years earlier.

This was fuelled by the image of Keane leaning over the injured Haaland as he received treatment, shouting at him aggressively.

Keane was banned for an initial three matches and fined £5,000 for the incident, but later received a further five match ban and £150,000 fine when he hinted he meant to hurt Haaland in his autobiography in August 2002.

In recent years, Keane has become one of football's most entertaining pundits thanks to his work for both ITV and Sky Sports.

Viewers witnessed Keane get into a furious disagreement with fellow pundit Jamie Redknapp last season as they clashed over the quality of the Tottenham Hotspur squad.

Redknapp disagreed and the pair continued to raise their voices and speak over each other before the topic of discussion moved on in the studio.

Keane's managerial career has seen him take charge at both Sunderland and Ipswich Town, and he has also worked as an assistant manager for the Irish national team in recent years.

One player he came across as a coach at both club and country level was forward Jonathan Walters, who Keane came to blows with when Walters requested to leave Ipswich in 2010.

Walters told JOE in 2019 that he offered out Keane and called him a bully after standing up to his manager for blocking his desired move to Stoke City.