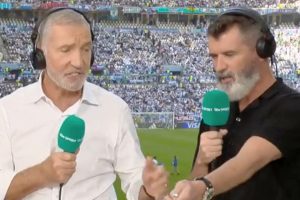 Roy Keane and Graeme Souness clashed live on air during Argentina's World Cup tie against Saudi Arabia in an exchange that got awkward very fast.

The iconic former Manchester United and Liverpool captains got into a charged disagreement over a penalty awarded for holding inside the area which Lionel Messi dispatched, with Keane thinking it was rather soft.

Souness, going by the letter of the law, tried to explain why the decision was the correct one, with presenter Laura Woods forced to step in and fellow ITV pundit Joe Cole left silent – with the full transcript below.

Souness: "Roy, you’re not listening to what Laura is saying. The directive from referees…"

Keane: "I heard exactly what she said. It’s going to encourage diving"

Souness: "This is not about opinion, that’s a fact, the guy wasn’t looking at the ball."

Keane: "Well I’m here to give my opinion. That’s not a penalty."

Who would win if the pair got in the ring in their prime? Give us your thoughts in the comments section below.

Souness: "This is not about our opinions, it’s about the laws of the game."

Keane: "Well what are we here for? I’m here to give my opinion."

Keane: "That’s not a penalty."

Souness: "Their interpretation, the new laws…."

Keane: "That’s not a penalty."

Souness: "Let someone else speak."

Souness: "You learn a lot more if you listen than talk all the time."

"We’ve seen a different Argentina today, it’s not the Argentina I expected to see, they don’t seem too intent on dominating the ball. I just feel Argentina have another gear to go into."

Keane: "We’re going to see a record number of penalties at this World Cup, record number. That’s not a penalty."

Souness: "I thought we moved on from that."

Cole then gave his opinion by saying: "I think it was a penalty."

As Woods concluded: "Don’t make eye contact with Roy, don’t do it."

Despite Argentina taking the lead and scoring two offside goals, Saudi Arabia hit back through Saleh Alshehri and Salem Aldawsari after the break.