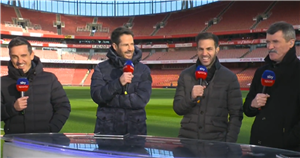 A whole 16 years might have passed since they were team-mates but not even Father Time could stop Roy Keane slagging Gary Neville off for a bit of bad defending.

The two Manchester United legends were on punditry duty ahead of their former side's trip to Arsenal on Sunday and were looking back over some old footage of the fixture with guest pundit and former Gunners midfield Cesc Fabregas.

A clip flashed up of Arsenal's 1-0 win over United in September 2006, showing Fabregas dancing his way past Neville before setting up Emmanuel Adebayor for the winner.

"I think Gary can do a little bit better, right Roy?" a smiling Fabregas asks.

"Absolutely," the Irishman replies. "Shocking. You've turned your back on him, Gary. Just go and engage him. You've ended up doing nothing."

Just like with Fabregas at the time, Neville had no answer, awkwardly laughing off the barb with a child-like look of embarrassment slapped across his face.

Where does Gary Neville rank in terms of all-time Premier League right backs? Let us know what you reckon in the comments section below.

Later in the day, Arsenal beat United 3-2 in a thrilling contest at the Emirates to re-establish their five-point lead at the top of the Premier League, and keep their title charge in full swing.

A brace from Eddie Nketiah, including a 90th-minute winner, as well as a Bukayo Saka screamer cancelled out goals from Marcus Rashford and Lisandro Martinez to seal the points for the Gunners and end United's run of six games without a league defeat.