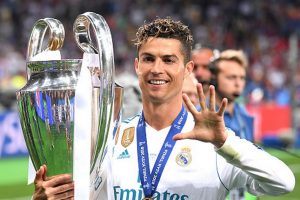 Cristiano Ronaldo is perhaps the most successful player to ever grace the Champions League, and the Portuguese star equalled another record as he started for Manchester United against Young Boys.

It was his 177th appearance in the competition, which equalled the record set by former Real Madrid teammate Iker Casillas, and in typical Ronaldo fashion the occasion was marked with a goal.

The 36-year-old scored his first European goal for United in over 12 years, adding to his tally as Champions League's all-time top scorer, and Ronaldo has won five European cups during his time at United and Madrid.

Ronaldo's Champions League debut was 18 years ago, but he has since achieved an awful lot in the competition, and Daily Star Sport has ranked his top ten moments…

This may come as a surprise but Ronaldo's first Champions League goal wasn't until his fourth season at United.

The first goal came against Roma in 2007 on a spectacular night at Old Trafford, as Ronaldo scored twice in a 7-1 thrashing as United progressed into the semi-finals

2007 was Ronaldo's breakout season at United, as he hit more than 20 goals for the first time in his career, which is now just expected from the Portuguese star.

Ronaldo has gone on to add 133 since his first and second against Roma, and is the leading goalscorer in the competitions history.

There aren't many better moments than scoring a brace to book your sides place in the Champions League final, unless you're on away soil against Premier League rivals.

Ronaldo bagged a stunning brace against Arsenal at the Emirates Stadium during a semi-final second leg in 2009, as The Red Devils made it to the final for the second successive year.

Both goals were extremely different, as one was an outrageous free-kick from 30+ yards, and the other was a blistering counter-attack.

Ronaldo started the move before sprinting the entire length of the field to score as he stretched Arsene Wenger's side.

Ronaldo won the first ever Puskas award back in 2009, as he scored from 40-yards out to help his side reach the Champions League semi-finals.

The screamer was one of Ronaldo's more memorable goals for United, but it was made even sweeter as it fell against former Portuguese rivals FC Porto.

Ronaldo joined United from Sporting Lisbon, who had a long-standing rivalry with Porto, back in 2003, and the Portuguese star has previously said he takes extra pride in scoring against his former rival.

To make matters worse for Porto, Ronaldo has scored against them in the Champions League for United, Madrid and Juventus.

Ronaldo won his first ever Champions League trophy during the 2007/08 season, as United defeated Chelsea on penalties.

The Portuguese star scored for United during the game, but Frank Lampard cancelled out his header to send the game the full distance.

The match went to penalties and Ronaldo missed his penalty, but was spared his potential blushes as John Terry slipped and missed what would've been the winning penalty for Chelsea.

After scoring 135 Champions League goals, it's likely that some of them are likely to be good, and Ronaldo scored one of the great strikes in 2018 against Juventus.

The Portuguese star scored as stunning overhead kick for Madrid, which was even applauded by the opposition crowd, who became very familiar with Ronaldo shortly after.

Madrid beat Juventus 3-0 that night in the first leg of their quarter final against the Italian side, and again was the hero in the second leg, scoring a last minute penalty to send his side through.

Ronaldo was signed by Juventus to try and lead them to Champions League success, and the Portuguese star pulled off a marvellous performance against former Madrid rivals Atletico.

Diego Simeone's side thought they had finally seen the back of Ronaldo as he departed La Liga, but they were drawn against Juventus in the round of 16 the following season.

Even as a 34-year-old, Ronaldo stunned Atleti as he scored a hat-trick in the second leg to overturn a 2-0 deficit and knock out Simeone's side.

He explained following the final whistle: "This was why Juventus brought me here".

Similarly to Ronaldo's wait for Champions League success at United, the Portuguese star had to wait four seasons for European glory with his new side.

Ronaldo joined Madrid in 2009, and Los Blancos were waiting to achieve their 10th Champions League crown, which finally came.

The last minute strike was his 17th goal of the competition that season, an incredible tally that is still a Champions League record to this day.

Ronaldo scored an incredible five goals during their quarter final success against the Bundesliga giants, as Madrid went on to win the Champions League again that year

To add sentiment to the occasion, Ronaldo also scored his 100th European goal in the first leg against Bayern, becoming the first player in history to reach a century.

He achieved the century milestone in 143 appearances, scoring the second 50 goals in only 47 games.

After scoring late on in his first Champions League success with Madrid, and scoring the winning penalty in his second, Ronaldo went one better in 2017 and scored a brace in the final against Juventus.

Los Blancos won the final 4-1, after Mario Mandzukic scored a stunner for the Italian side, but that goal was quickly forgotten about as Ronaldo fired his side to glory.

After scoring five against Juventus over two legs, Ronaldo then scored a hat-trick against Atletico in the first leg of their semi final, before adding two more in the final.

Ronaldo won his and fifth Champions League crown in 2018 as his Real Madrid side beat Liverpool 3-1 in Kyiv.

It was Gareth Bale that stole the show as the Welshman scored an incredible bicycle kick, but the success moved Ronaldo into Champions League royalty, placing him joint second with five majors.

Ronaldo shares his five successes with Madrid legend Alfredo Di Stefano and AC Milan great Paulo Maldini, but is the only player to achieve all of these titles post-1992.

The Portuguese star couldn't add to his collection at Juventus, but will be targeting a sixth at United to move him level with Francisco Gento, who dominated with Madrid between 1956-1966.