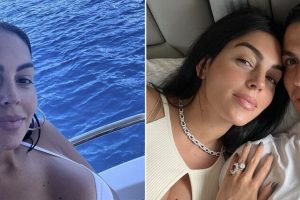 The couple having been soaking up the Spanish sunshine this week with Ronaldo treating his extended family to a luxury holiday at the foot of the Tramuntana mountains in Majorca.

After spending the morning on the Manchester United superstar's stunning £55 million yacht, Georgina couldn't resist giving her 38 million followers a sneak peak at the good stuff after taking a dip in the crystal blue ocean.

READ MORE: Who is Cristiano Ronaldo's girlfriend Georgina Rodriguez and how did they meet?

"Absolute amazing. You are my queen," one adoring follower wrote.

"You are just too hot," wrote another, "while a third joked: "I bet you're all slippery after that swim. Such a nice image."

Despite his girlfriend sending Instagram into a mini meltdown, Ronaldo himself looked more interested in fishing based on another of the 28-year-old's social media posts.

Is Georgina Rodriguez the hottest Premier League WAG? Let us know what you reckon in the comments section.

The holiday hasn't been going completely swimmingly, mind. Earlier this week Ronaldo's £1.7 million Bugatti – which was shipped out to the villa especially – crashed into the family's holiday home and was badly damaged.

Luckily none of Ronaldo's family were in the car at the time and no one was injured.

Ronaldo himself has been linked with a shock move to Chelsea today following news that his agent Jorge Mendes met up with new Blues owner Todd Boehly last week.