Ronaldo, Messi roll back the years in nine-goal thriller 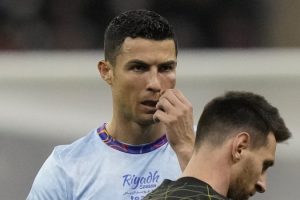 Riyadh: Cristiano Ronaldo and Lionel Messi transported fans back in time to the heyday of their storied rivalry, as both forwards got on the scoresheet in an exhibition match on Thursday before Hugo Ekitike earned 10-man PSG a 5-4 win over the Riyadh Season Team.

While the match may not have much significance for the teams involved, fans around the world got plenty of bang for their buck as a story that has dominated the sport for over a decade appeared to come to an end in a memorable goalfest.

In an action-packed first half at the King Fahd Stadium in Riyadh, goals from Messi and Marquinhos were cancelled out by a Ronaldo brace, while PSG’s Juan Bernat was sent off for a lunging tackle on Saudi international Salem Al-Dawsari.

Both teams kept their foot on the gas in the second half, but Ekitike’s 78th-minute strike eventually made the difference on the night.

Decked in a new black and gold kit, PSG made a blistering start to the game, racing into the lead in the third minute thanks to a deft finish from Messi.

Played through on goal by Neymar, Messi was able to poke the ball past goalkeeper Mohamed Al-Owais, who he last faced in Saudi Arabia’s shock World Cup win over Argentina in November. 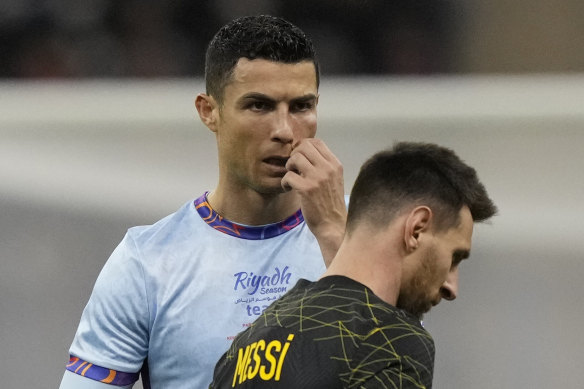 The exhibition match was likely the end of the road for the storied Ronaldo v Messi rivalry.Credit:AP

Ronaldo was an ever-present threat and won a penalty when goalkeeper Keylor Navas clattered into him. Sporting a bright red bruise on his cheek as a result of the collision, Ronaldo picked himself up to calmly convert the spot kick and level the game.

Bernat was shown a red card right after the equaliser, but the Ligue 1 club responded well to going a man down, scoring through defender Marquinhos.

Their lead would not last long, as Ronaldo once again levelled the game on the verge of half-time, hammering home a rebound after Sergio Ramos botched a straightforward clearance. 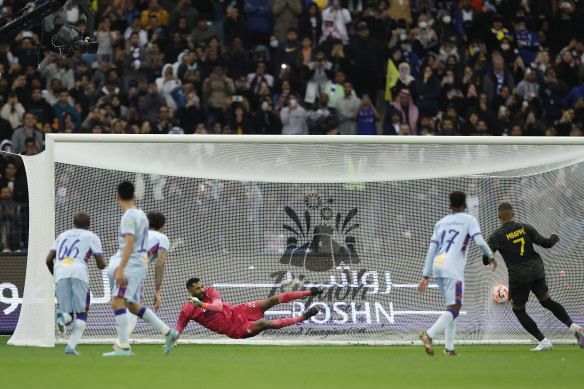 The goals continued to come thick and fast after the break, as Ramos turned in a Kylian Mbappe cross before South Korean Jang Hyun-soo replied with a near-post header from a corner to make it 3-3.

A handball by Ali Al-Bulaihi gave the visitors a penalty, which was expertly dispatched by Mbappe on the hour. It was Mbappe’s last contribution, as he was taken off shortly after, along with teammates Messi and Neymar, as well as Ronaldo.

Ekitike then extended PSG’s lead to 5-3 with a thumping finish following a lung-busting run from the halfway line before Anderson Talisca scored a late consolation goal for the Saudis in added time.

Though he was unable to get his newest chapter in Saudi Arabia off to a winning start, 37-year-old Ronaldo will take heart from his performance as he prepares to make his first competitive appearance for Al Nassr when they host Al Ettifaq on Sunday.

Watch every match of the UEFA Champions League, UEFA Europa League and UEFA Europa Conference League on Stan Sport. Returns for the Round of 16, with all the action streaming ad-free, live and on demand from February 15.