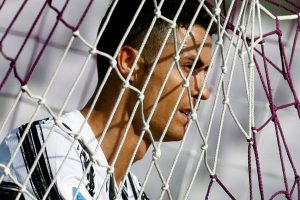 Cristiano Ronaldo is growing increasingly “irritable” and has become “very distant” from teammates as speculation continues to swirl about a potential Juventus exit.

The 36-year-old wll have one year left on his whopping €30m-per-year contract, when the season ends in a matter of weeks.

But with the Italian giants reportedly looking to cut costs – particularly if they miss out on the Champions League – Ronaldo could be allowed to leave.

Juventus director Favio Paratici recently performed a dramatic U-turn, first claiming the forward could look for a new challenge, before confirming he is set to stay in Turin.

“We’ve decided to keep Cristiano Ronaldo. He’s the best player in the world and we are holding on tight,” Paratici said last month.

“We have a project that we started from last season, one game will not change our views or our strategy. This line continues and we are very happy with what we’ve done, so we’ll continue working to improve.”

However, Gazetta dello Sport (via Marca) claim that frustrations on the pitch have changed his behaviour and is no longer enjoying his football.

"He's nervous, irritable and very distant from his teammates," the report suggests.

"He seems to have given up and he's not got as much fight as he usually does.

"He seemed very different against Fiorentina, which is a worrying sign.

"Ronaldo is no longer trying to hide these feelings."

"He's isolated away from the pitch," the article continued. "It seems that he's getting closer and closer to leaving Juventus.

Should Ronaldo leave Juventus, it is likely to be a very restricted market to those that are willing to shell out for his huge salary.

Real Madrid president Floretino Perez confirmed there was no chance of a return to the club he won four Champions League crowns with.

“Cristiano Ronaldo will not come back to Real Madrid,” Perez said earlier this month.

“It does not makes sense, he has a contract with Juventus. I love him a lot, he has given us a lot.”