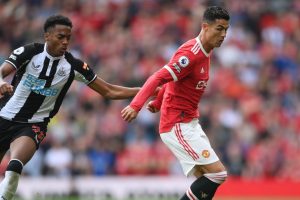 Cristiano Ronaldo has been spotted playing 'four different positions' for Manchester United as he makes his second debut for the Red Devils.

And fans were able to get their first glimpse of Ronaldo in red as Solskjaer's side faced Newcastle United at Old Trafford on Saturday.

However, there has been confusion about where Ronaldo was playing for the Red Devils with him spotted all over the park.

When asked about his position – on BBC's Final Score – Dion Dublin came up with a confusing answer.

"Do we know where Ronaldo is actually playing at the moment, he seems to be defending, and kind of attacking as well."

And Dublin responded: "Well, I've seen him in four positions so far… he can go where he wants," he said while laughing.

"Who's going to argue with him?" Dublin added.

There had been questions about where Ronaldo would play, with some fans suggesting he could be deployed out wide rather than his natural striker role.

What have you though of Ronaldo's debut? Let us know in the comments section

However, despite not having a nailed down position, Ronaldo was still able to get himself on the scoresheet just before half-time.

The Portuguese megastar arrived at the back post to roll back the years at Old Trafford.