Home » Soccer » Ronaldo doesn’t own Valladolid for the boardroom buffets!

Ronaldo doesn’t own Valladolid for the boardroom buffets!

Ronaldo doesn’t own Valladolid for the boardroom buffets! Brazil legend has a small fortune to invest and wants glory – and he’ll get help from Real Madrid

Retired footballers used to buy pubs, now they buy football clubs. There’s the class of ’92 with Salford City, there’s David Beckham with Inter Miami and as of last year there’s Ronaldo with Valladolid.

The difference between Ronaldo and the rest is that Valladolid is not a young club trying to climb the league ladder or a new franchise with a massive untapped potential. It’s a 91-year-old bastion of the Spanish game. Never a league winner but twice a Copa del Rey finalist and with 43 seasons in the top flight.

The simple answer to why they are now becoming owners is that they can. Players have never before retired with so much cash. Ronaldo earned £160million during his career, Forbes suggests. If he doesn’t want to coach and he doesn’t want to represent players or a club then why not sit in the directors’ box and take charge of an entire footballing institution. 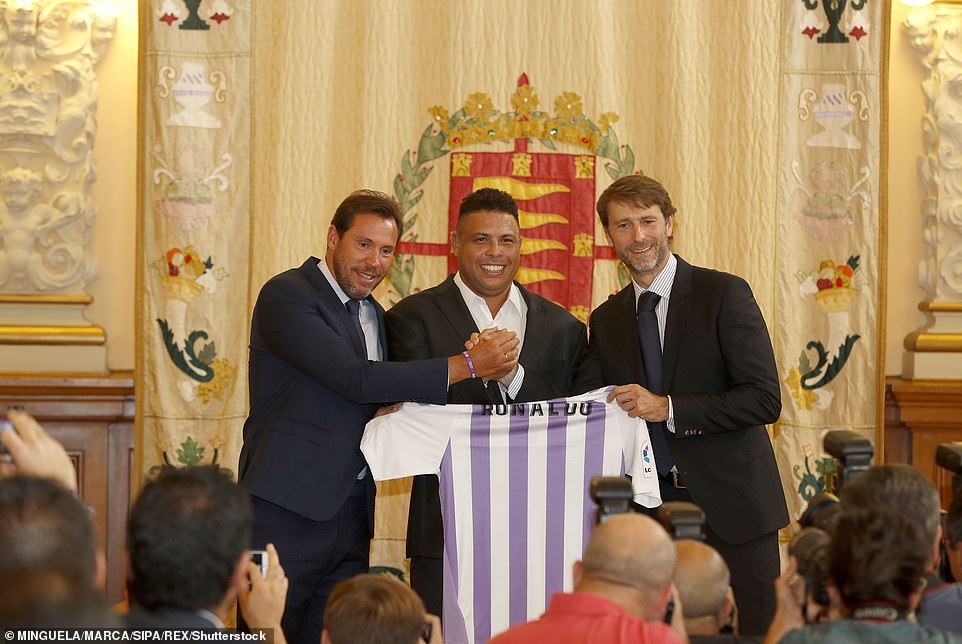 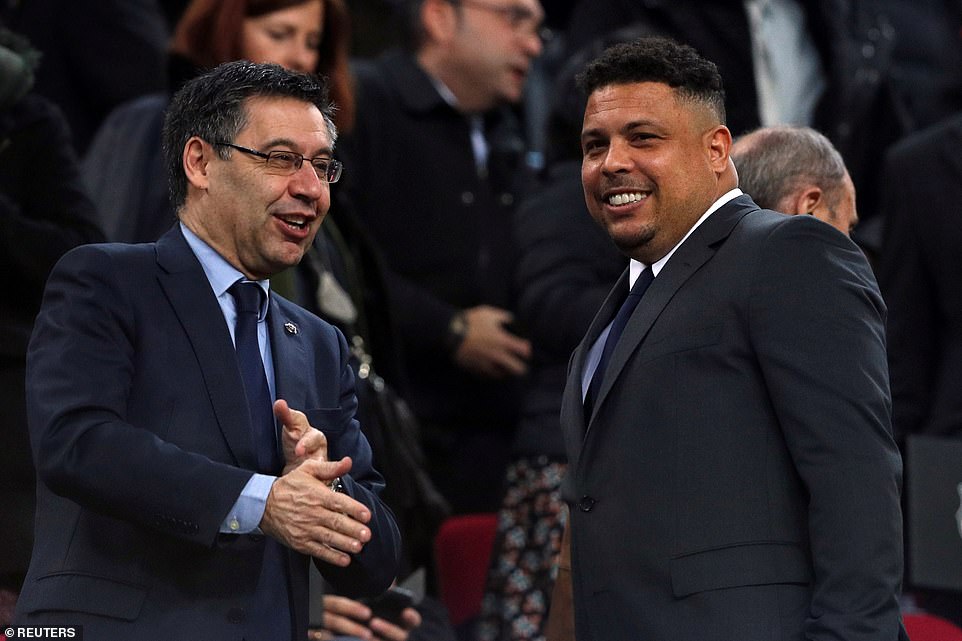 Instead of coaching or acting as a club ambassador, Ronaldo has invested his own money and taken a place in the boardroom

Last season he took a seat in the Bernabeu alongside the man who once decided Real Madrid should spend £40m on him. Florentino Perez sanctioned the purchase of Ronaldo from Inter Milan in 2002.

Asked for the most difficult player he ever coached Capello said: ‘He was the best I coached and the most difficult. He turned up injured weighing 96 kilos. I asked him how much he weighed when he won the World Cup in 2002 and he said 84 kilos. I asked him to get down to 87. In the end he won. He did not want to drop his weight. He got down to 94. He played three games up front with [Ruud] van Nistelrooy and we lost all three. It was a shame to see the player with the most talent not be willing to make a sacrifice.’

Ronaldo’s penchant for fine food need not be reined in now. The boardroom buffets up and down La Liga are his to feast on. But he’s not taken over Valladolid for the laid-back life. He wants to make a success of it.

He’s been asked about how far his powers to do something about that extended and there is a humorous and a more serious answer. The joke is that he has tried to school the players without any real success.

Attacking midfielder Keko told Marca last year: ‘It’s complicated when Ronaldo gives you advice. He tells me how I should have finished a move but it’s like Messi telling you how to receive the ball between the lines. What can you do? You know he’s right in theory but you also know he has done it in practice. So you say: “Yes you’re right”.

The more serious response is for the club to buy players who can finish – to bring in strikers who can do as Ronaldo would do. The season just past when Valladolid only stayed up in the penultimate week’s programme they struggled playing one up front and alternating between Enes Unal, who scored six goals, and Duje Cop, who failed to get off the mark in the league. 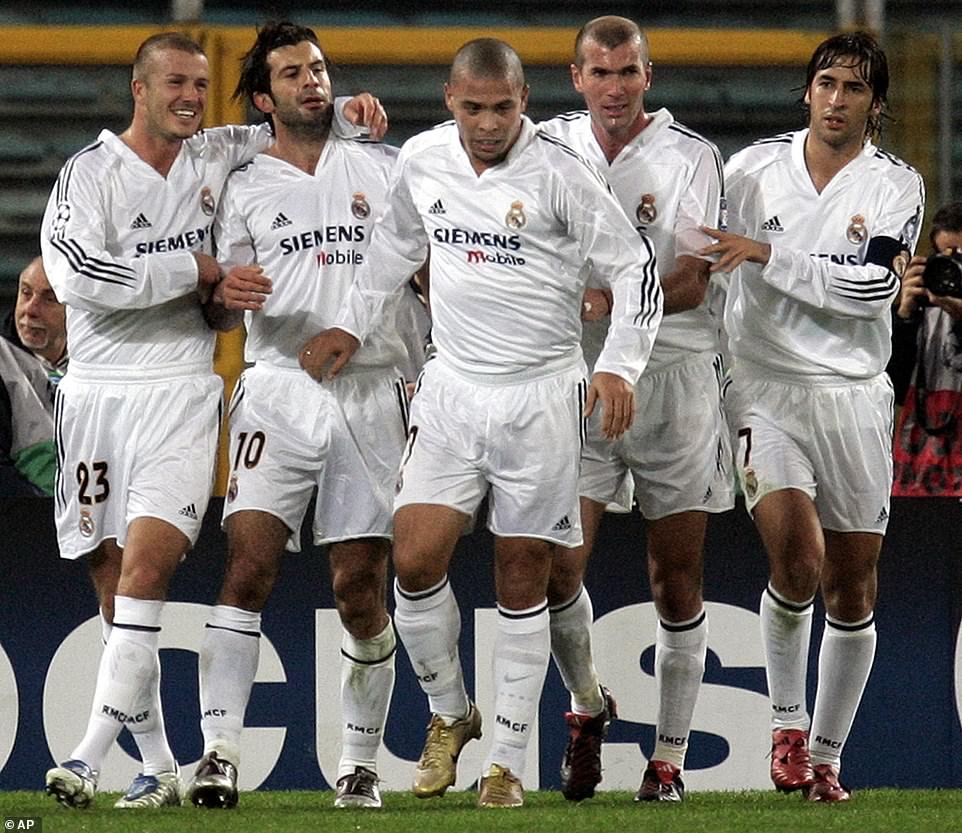 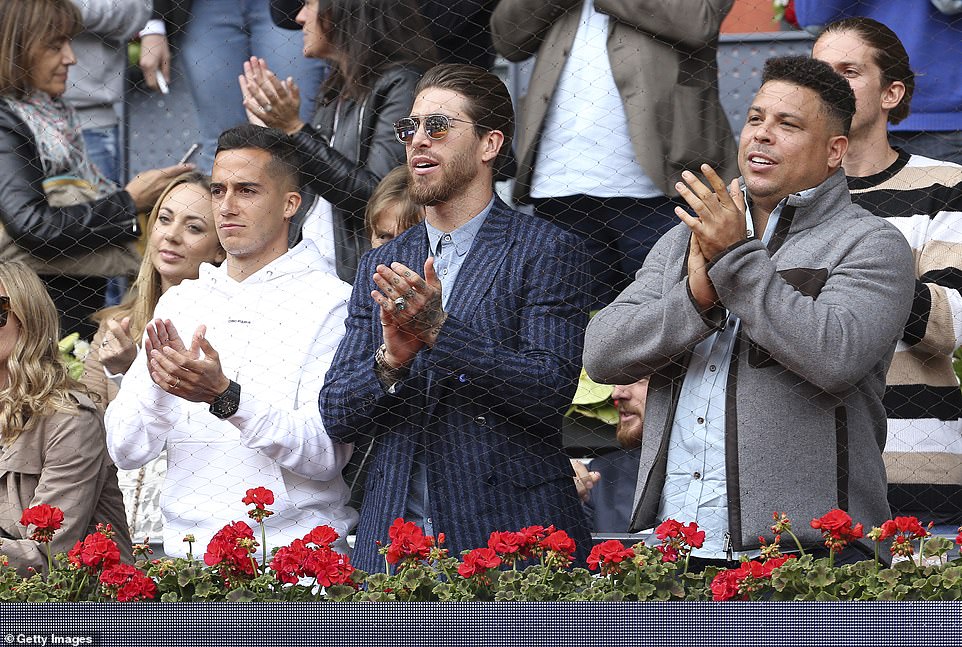 He will hope to use his Real connections to help Valladolid – here he is pictured at the Madrid Open tennis tournament in May, alongside Real forward Lucas Vazquez (left) and captain Sergio Ramos watching Rafael Nadal at La Caja Magica 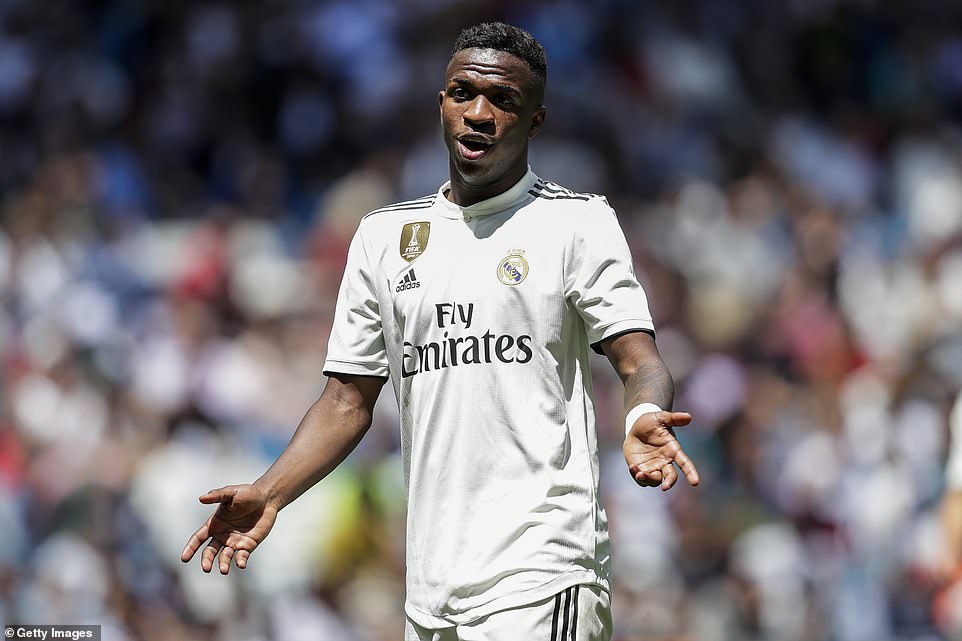 In the winter window, Ronaldo – whose purchase of 51 per cent of Valladolid shares cost him £25m – made his first big signing in the shape of forward Sergio Guardiola from Cordoba. He had scored 22 goals in the second division in the previous season and although he only finished the campaign for Valladolid with three goals he was a massive improvement on the situation before he arrived.

Another serious issue is gripping the club too – the match-fixing scandal that has rocked Spanish football. Valladolid’s 2-0 defeat by Valencia on the last day of the season is understood to be one of three games being investigated.

One of the 10 players taken into custody was Borja Fernandez, a close friend of Ronaldo’s who played over 200 times for Valladolid. After retiring at the end of the season he was expected to take up a position in the club – but Ronaldo has put that on hold pending an internal inquiry.

Ronaldo said recently: ‘Borja is a friend, I hope that the situation clears and it is proved that it has nothing to do with him, but it is not in our hands.’

He added: ‘I think it’s good that it is investigated because we all want there to be no corruption. I come from Brazil where we have the kings of corruption. We will support the investigation. We will do everything we can to help with inquiries and give all the information we have at our disposal.’

Looking ahead to next season, however, Ronaldo has been very open about wanting a helping hand from the Spanish club he has most affiliation with – Real Madrid.

‘We don’t have any money but I have already asked Madrid for Vinicius,’ Ronaldo told reporters in Spain recently. ‘It’s clear he has a huge talent and Madrid want to keep him but if there is a possibility one day then we would like to have him.’ 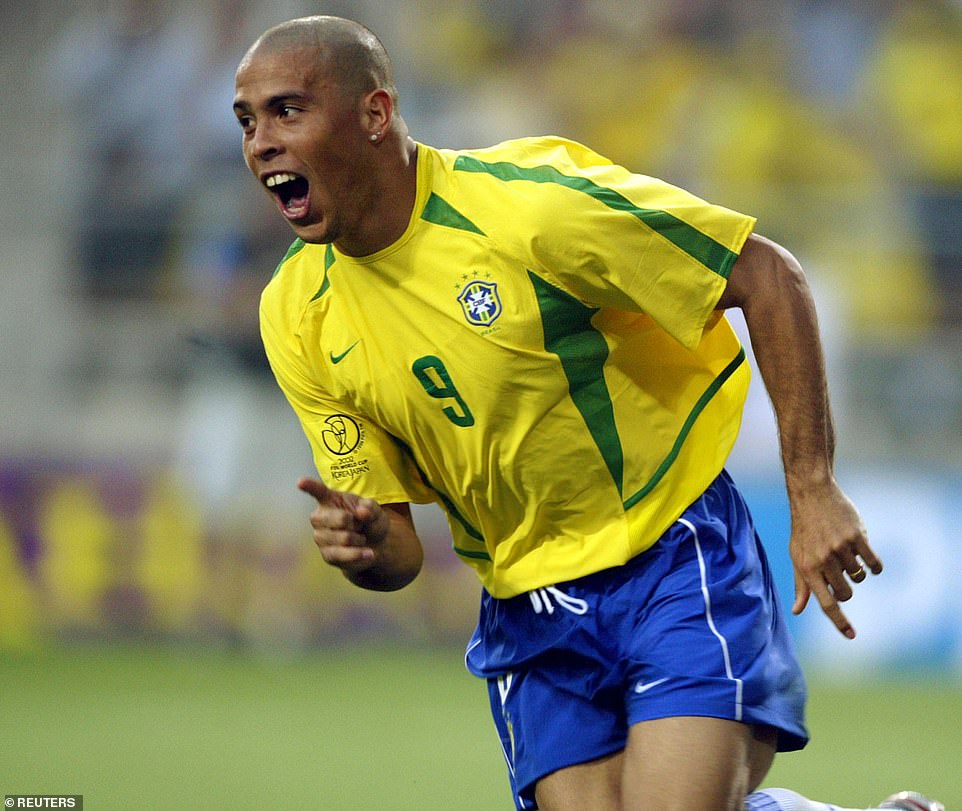 During his heyday, Ronaldo was one of the greatest strikers ever to play the game, for Brazil and a host of giant clubs

Vinicius has not so far warmed to the idea but if Real Madrid come good on buying both Eden Hazard and Luka Jovic and then fail to move on the likes of Gareth Bale or Marco Asensio then Zidane may feel that a season playing every week in the top flight would better serve Vinicius than a year lost getting minutes here and there from the bench.

Even if Valladolid do not get Vinicius it seems clear that Ronaldo is considered a friend of the club and will benefit from being offered loan players. Rodrygo Goes will arrive this summer and could be shipped out to Ronaldo’s team on loan. 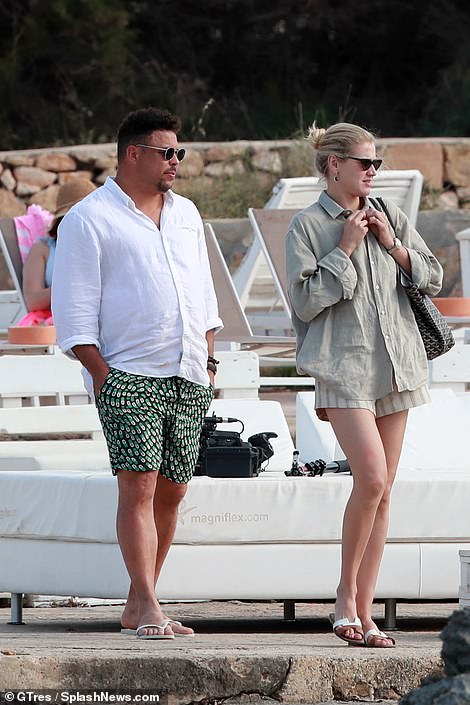 Florentino Perez has always had a soft spot for Ronaldo. In 2006 when he resigned from the presidency (before returning in 2009) he spoke about a culture of spoilt players that he had inadvertently encouraged at the club.

‘Perhaps I have not brought up these players well,’ he said in his goodbye press conference. ‘Now I want to tell them that all that matters is Real Madrid.’

It was always understood that Ronaldo was one of those who had been over-indulged by the famous ‘Galaticos’ ethos that Perez had created.

There were no hard feelings, however, and when Perez returned three years later and the club spent close to £225m on rebuilding, the £31.5m purchase of Karim Benzema was put down by many as Perez’ best shot at finding another Ronaldo.

Perez has never been shy about going down to the dressing room at the end of games. The current falling out between captain Sergio Ramos and the president has part of its origin in Perez going down into the dressing room after Real Madrid were knocked out of the Champions League by Ajax and waiting for the players to read them the riot act. Ramos had not played that night but was allegedly not spared.

Ronaldo will have learned plenty from Perez and from Silvio Berlusconi who was his president at Milan and who arguably knew even less about the game and tried to intervene even more.

But there is one thing he is not copying. He has already said that he will not go down to the dressing room, neither before nor after games to talk to the players. It’s a brave promise.

This season Valladolid saved themselves. Next season with a little planned investment, the objective will be to push towards the European places. Let’s see if that self-imposed dressing room ban holds firm. 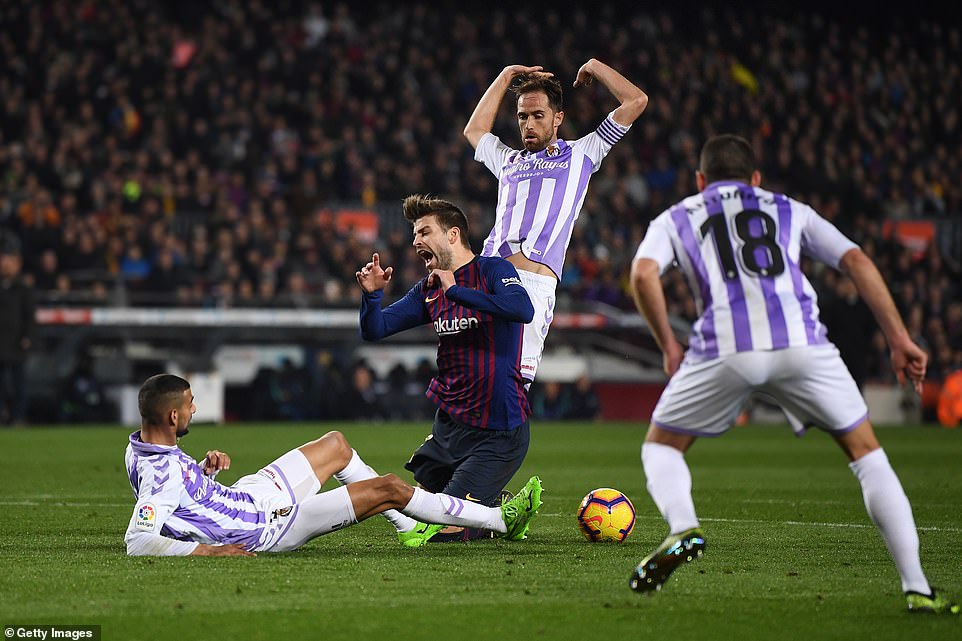 Valladolid finished 16th in La Liga during Ronaldo’s first season at the club, which included a 1-0 loss at Barcelona in February