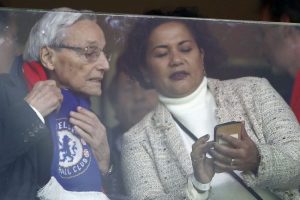 Roman Abramovich may have bankrolled Chelsea's success in recent years.

But master scout Piet de Visser has played a huge part in helping the Russian enjoy a successful tenure at the helm of the Blues.

David Luiz, Arjen Robben, Alex and Thibaut Courtois are some of the players who have graced Stamford Bridge due to the veteran scout.

The Dutchman enjoyed a fantastic career as a player and manager before retiring early due to heart problems.

Since then, De Visser has spent his time unearthing some of football's greatest talents from all around the globe.

“One of my best scoutings ever, Kevin De Bruyne, came from the youth to the first team. And from the first touch of the ball, I was in love with him.

“He only wants to win. His passing, his vision, left foot or right foot it doesn’t matter.

De Visser has a tactical code than only he and his secretary can understand, which involves skill, vision, physique, mentality and character.

And with Abramovich so impressed by his ability to spot the next big thing, De Visser has been a player adviser at Chelsea in recent years.

Arsenal defender Luiz, 33, has previously said: “From Piet I learned the true meaning of compassion in football.

“Nobody else I know is more able to pass on the essence of the beautiful game than Piet.

“Piet is, in my life, the ultimate representative for enthusiasm in football.”

And Jose Mourinho is also an admirer of the former PSV scout.

Speaking of De Visser: “I can’t scout the way he does.

“His desire to know everything about players in the four corners of the world is invaluable.”

Ruud van Nistelrooy, Jefferson Farfan and Heurelho Gomes are other players who were discovered by De Visser.