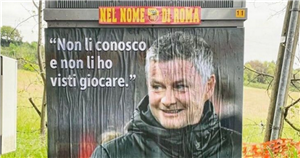 Roma fans have displayed several anti-Ole Gunnar Solskjaer banners outside the club’s training ground ahead of the first-leg of their Europa League semi-final with Manchester United.

“I’ve not really seen too much of them,” Solskjaer said of the Serie A side, speaking to BT Sport.

“I know they’ve had two good games against Ajax where they defended well, as Italian teams always do.

Despite the seemingly harmless comments, Roma fans were not pleased and voiced their displeasure with a series of posters outside the club’s training ground.

The banners feature a picture of Solskjaer alongside the quote: “I don’t know them and I haven’t seen them play.”

Roma’s players will be looking to make Solskjaer eat his words on Thursday, even if history is against them.

United and Roma have met six times in European competition, with the Red Devils coming out on top on four occasions.

The most famous meeting between the pair came during the quarter-final of the Champions League in April 2007.

With United 2-1 down from the first-leg, Sir Alex Ferguson required a big performance from his side at Old Trafford.

A big performance he most certainly got, with United running out 7-1 winners on the night to go through 8-3 on aggregate.

Ronaldo and Carrick then doubled their tallies for the evening in the second-half, with Patrice Evra rounding off the scoring.

Daniele De Rossi scored the only goal of the game for the visitors who’ll be hoping for a more successful evening on Thursday night.