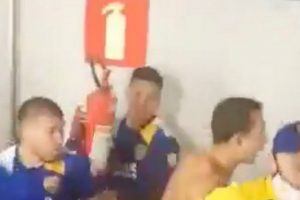 Chaotic tunnel footage has emerged from Tuesday night showing a wild and heated altercation between players and officials from both Boca Juniors and Atletico Mineiro.

Angry players from the Argentine visitors can be seen attempting to reach the home dressing room after being incensed by VAR decisions as they crashed out of the Copa Libertadores on penalties.

Prior to being refrained by tear gas, former Manchester United defender Marcos Rojo is spotted trying to remove a fire extinguisher from the wall before holding it closely with the opposition facing them down the tunnel.

His team-mates were also carrying metal railings above their heads and missiles were thrown inside the Estadio Mineirao in Belo Horizonte.

It is believed that the match officials had taken shelter in the home dressing room after tensions rose following a controversial tie, in which Boca had goals disallowed by VAR in both legs of the round of 16 tie.

As a result of the violence in the tunnel, Brazilian police originally wanted to charge three Boca players with civil disturbance.

A member of the police force, Santiago Mayor, told local media: "We have information that the match delegate said there was an aggression and at least three Boca players were identified as the aggressors.

"There are videos that show that there was contempt."

"After a long negotiation, mediated by president Sérgio Coelho, and the Argentinian delegation went to the police station to report an incident for property damage and aggression. No one will be arrested."

Boca stated that their delegation would accompany any players to the police station and that they would not leave Brazil without them, as a total of eight members of Boca staff attended the local station to provide evidence.

What punishment should Boca Juniors face for the actions of their players? Let us know your thoughts in the comments section below.

The Argentine ambassador to Brazil was working to ensure the players could leave the country as quickly as possible by requesting they be issued with fines for their roles in the violence.

Boca are no strangers to disturbances in the Copa Libertadores, with the second leg of the 2018 final against arch-rivals River Plate being postponed multiple times and then moved to Madrid after fan trouble and a bus attack.

As for the game itself, both legs finished goalless before 2013 winners Atletico Mineiro won 3-1 on penalties, with Rojo playing 90 minutes in both games and picking up a booking in each. The quality of refereeing was attributed to Boca's defeat and the ugly scenes at full-time as midfielder Diego Gonzalez explained: "Without a doubt, everyone can see that. We scored a good goal, and the fact is that we deserved to win the first game as well.

"This hurts, we feel bad. CONMEBOL [South America's governing body] need to look at the refereeing."

Boca legend Juan Roman Riquelme, the club's vice-president, came to the defence of his side after the ugly clashes, saying: "When they were in the dressing room, you see a person in a suit who pushed the boys and insults them. The policemen threw gas in the players' faces.

"They gas, what do you do? Do you defend yourself or do you let them hit you? You see the president throwing bottles, the police… they don't say anything to them. That's the truth."

Rojo made the permanent return to his home country in February this year on a free transfer after seven years at Old Trafford, where he made 122 appearances and won five trophies.