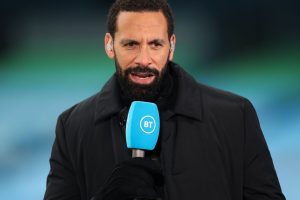 Rio Ferdinand claims Phil Jones is taking up unnecessary space at Manchester United and believes the defender should leave the club.

The Man United legend, 42, spoke some harsh truths regarding his former central-defensive partner Jones, who was once one of England’s most highly-rated young talents.

But the 29-year-old has spent the last five seasons predominantly on the treatment table or on the bench as he enters his tenth season with the record Premier League title winners.

Ferdinand, who won nearly every trophy possible at United, believes Jones is now holding up the development of another potential youngster on the rise.

Speaking on his YouTube show Vibe with FIVE, Ferdinand said: “He’s taking up a youth team player’s position in that squad right now.

“He’s had too many injuries now. I was in the same team as Phil Jones.

"He came from Blackburn as a young kid and everyone was saying he was going to be this great player.

“Huge potential but injuries have absolutely annihilated his career and then confidence issues at certain times as well.

“He’s never been able to fully establish himself in the team. Whether it’s injuries, lack of form, lack of confidence. I think he should’ve gone ages ago.”

Do you think Phil Jones will play a role in Ole Gunnar Solskjaer's side this season? Let us know in the comments section.

Jones made a comeback from an 18-month knee problem in the friendly against Burnley last week but is unlikely to feature regularly for the Red Devils this season.

He finds himself behind Harry Maguire, Victor Lindelof, Eric Bailly and new marquee signing Raphael Varane in the pecking order, despite signing a four-year contract extension in 2019.

Ferdinand added: “I am baffled at how he’s still been given a new deal given his past few years at the club.

"It just doesn’t make sense to me how you get a new deal.

"I remember back in the day you’d have to do some absolute graft to get a new deal.