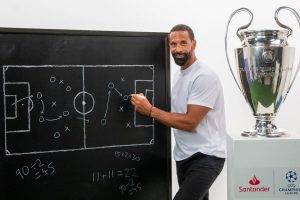 Rio Ferdinand has adopted a homeschooling technique inspired by his old boss Sir Alex Ferguson – giving his own ‘hairdryer’ type treatments to his kids during lesson time.

Like millions of parents across the UK, Ferdinand and his wife, Kate, have just come to the end of their second term as amateur teachers.

The retired footballer, who played teacher to three kids -Lorenz, 14, Tate, 12, and Tia, nine – while also raising newborn son Cree, admitted he’s a strict disciplinarian who isn’t afraid to be stern if his ‘students’ put a foot out of place during lesson time.

He said: “I think I've learned a lot from Sir Alex Ferguson. I've not gone for the soft touch approach. It's important to be disciplined with them during the school day, keeping on top of them.

“These are my own kids and I love them, but they can be difficult. You have to give them a bit of leeway but it's important to follow the fine line.

“We were having dinner and Kate said, 'tell your dad what you told me the other day'. They didn't want to so Kate said, 'sometimes you're quite stern, hard and sometimes even grumpy'.

“They said it's not all the time but during the daytime, and I told them that's when you've got to be working and I can't be seen sitting around and joking with you. I told them I am stern when they're meant to be working.”

The former England ace, who was signed by Sir Alex Ferguson at Man United for a then world record £30 million in 2002, is an ambassador for UEFA Champions League partner Santander which has partnered with Twinkl to create The Numbers Game, an interactive maths-based football game aimed at children aged 5–14. The Numbers Game is free to play and uses football to boost confidence in numeracy.

It’s in line with the UK teaching curriculum and designed for use at home and for when the children go back into the classroom on Monday.

Ferdinand also admitted he has a new-found level of respect for teachers and their patience as he juggled his busy career and increased parenting commitments.

He said: “I have so much respect for what teachers do. It's a hard job.

“The thing I've noticed is how intense it can be and how the teachers manage it all day and the pressures of managing all these different kids who have different ideas with the ways they want to learn.

“But one of the biggest things we've learnt to respect from teachers is their patience to deal with the kids. As a teacher I'm a three out of 10 because of my lack of patience. But Kate – I give her nine out of 10.”

Rio acknowledges that while homeschooling has its downsides, there have been positives as well, with children learning to work out, understand and manage their own timelines and their own schedules.

But the overall process has been tough for the Santander UK ambassador.

He said: “The first lockdown was a real good learning curve. It was so hands-on whereas now it's a lot smoother, but we’ve found it harder. The weather has played a big part, the kids' schedules don't marry up so we can't do stuff together to break up the day.

“As a family it's difficult – we never eat together at lunchtime. In the first lockdown we could go for a walk together and that was good for our mental wellbeing but this time we can't because their schedules are so different. I am here moaning but we're fortunate that we've got the resources to deal with a lot of issues.

“We're lucky because we've got space, but a lot of people don't. There are extra worries other families have that we don't really have to deal with – in terms of work, lack of work, food etc… and there is so much pressure on these families, who are having all these extra problems let alone home-schooling.”

As part of Santander’s educational initiative, Ferdinand returned to the training ground to create a series of UEFA Champions League-inspired videos to promote the new interactive Numbers Game which is designed to help engage children with maths.

The Champions League-themed game [www.twinkl.co.uk/thenumbersgame] can be played for free on PC, mobile or tablet, giving relief to parents struggling to cope with the demands of working and home schooling, with the resources reflecting the curriculum taught in schools.

Rio added: “Football has 100 per cent given me a better understanding of numbers and statistics.

“When I was younger it was a really good way of learning – looking at numbers like match attendances, seeing how much it costs to go to a game and working out how much change you’d get from a fiver for the programme.

“You find maths easier to understand and learn from when you’re interested. The game is all about data these days and all of the analytical stuff you see at matches is absolutely helping kids with their numerical understanding.”

The Numbers Game platform was first developed by UEFA Champions League partner Santander in 2019 and forms a key part of the bank’s commitment to financial empowerment and literacy.

Accompanying resources will be available to download for free from Twinkl’s online platform by teachers, parents and carers to use with children and young people.