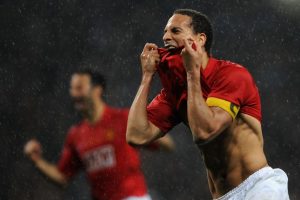 Rio Ferdinand admits he was "blubbering" as Sir Bobby Charlton spoke to him minutes after Manchester United lifted the Champions League trophy in 2008.

Ferdinand, in the absence of injured Gary Neville, captained the Red Devils to victory over Chelsea on penalties at Luzhniki Stadium in Moscow.

Club legend Charlton played a major role in the aftermath of the match, leading the United players up to the stage to collect their winners' medals.

But the moment which Ferdinand says "will never leave his body" came just seconds before the trophy presentation.

Charlton – a Munich air disaster survivor and 1968 European Cup-winning captain – took the defender aside to ensure he knew the significance of what United had just achieved.

"When Sir Bobby was there, that moment was one of the moments that will never leave my body ever, when I was stood at the bottom of them stairs," Ferdinand told his Vibe with Five podcast.

"I get mad emotional when I even speak about it sometimes because there was so much different things that were going on around that moment.

"But the fact that he took the time out to come and speak to me and just like grabbed me and said ‘Listen’.

"And I’d just almost started crying at the point about something else, I was all over the place but the way he grabbed me and spoke to me I was like, 'this guy is Mr Man Utd'. Crazy.

"The words that he spoke… it just threw me and I thought wow, it brought the enormity of what it means to be a Man Utd player and what it meant to Man Utd, the fans, the club, the history – he encapsulated it all within 15 seconds. It was crazy.

"The weird thing was I was there and I was standing at the bottom of the stairs and I’d started getting emotional because my mum was climbing over loads of seats to get my attention because there was no fans in that bit, it was cornered off.

What are your memories of the 2008 Champions League final? Have your say in the comments.

"All your family are there and it brings all what they’ve been through to get you there and I almost started blubbering a bit. I remember Vida [Nemanja Vidic] said to me ’no Rio, not here’.

"And Sir Bobby came to me just as we were going up and just kind of grabbed me and said, 'Rio, not many captains have lifted this trophy. You’re going to be one of them. Do you know what that means for this football club? What we had to go through, Munich, there’s lives that have been lost on the way here. He said this is history and you’re part of it now, your team are part of it. Go on lift that now and enjoy it.'

"Until you go to Man Utd and walk through them corridors you don’t understand what it is. There’s so much going on that you just immerse yourself in.

"And to have someone like that who’d been through all of that and was still coming to games, to me meant so much.

"He said: ‘I know what it feels like, don’t worry this will be with you for the rest of your life'."