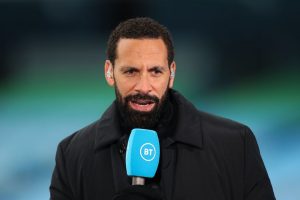 Rio Ferdinand has backed Chelsea to win the Premier League title next season and feels they should do their utmost to sign Sergio Aguero this summer to help boost their chances.

Thomas Tuchel has got the Blues firing again by turning them into a more cohesive unit since his appointment as manager back in January.

They now look in good shape to land a top four spot domestically and have an FA Cup final and potentially a Champions League final to come.

Chelsea meet Real Madrid in the second leg of their Champions League semi-final on Wednesday with a crucial away goal already secured from the 1-1 draw in Spain.

And Ferdinand believes Tuchel's side can build on their promising start to his reign by reclaiming the Premier League crown in 2021/22.

"Have you seen Chelsea’s stats. They’re my team to win the league next year," Ferdinand said on his Vibe with Five podcast.

"They are seriously, this team what he’s done going in there deserves nothing but applause."

Chelsea should arguably have been in contention for the title this season given their huge outlay of over £200million on new signings last summer.

Sadly at the expense of ex-boss Frank Lampard, many of their new recruits struggled to get going, with Timo Werner a particular target for criticism, but Ferdinand has tipped the German striker to overcome his difficult first year in England.

"Werner will bang next year. It’s his first year in the country, people are forgetting he’s settling into a new country during a pandemic. This isn’t the most settling period by the way," he said.

"Just come in, he’s still got over 10 goals, over 10 assists, most goal involvements at the club."

Tuchel is still thought to be seeking more firepower in attack, with Erling Haaland the ideal target, though the availability of Man City star Aguero on a free could be a tempting solution.

"I think he [Aguero] stays in the Premier League," Ferdinand added. "If I’m Chelsea I take him now. I go and get him.

"If I’m them I go and get Aguero if I can’t get Haaland or someone like that."