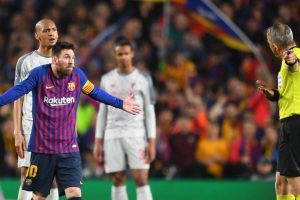 Paris Saint-Germain stars were left fuming after their defeat to Manchester City in the Champions League, with some accusing referee Bjorn Kuipers of swearing in their faces during the game.

Kuipers booked four PSG players and sent off Angel Di Maria as the Parisiens crashed out of the Champions League.

And after the game, Ander Herrera and Marco Verrati both claimed Kuipers had sworn at Leandro Paredes.

It isn't the first time the referee has faced criticism, as he also felt the scorn of Lionel Messi back in 2019, as discovered in footage from a UEFA documentary 'The Man In The Middle'.

Messi curled in a beautiful free-kick during a game between Barcelona and Liverpool in the Champions League.

And after the Argentine wheeled away in celebration, Kuipers said to him: "Messi! Why? Come on! Show them some respect! Go! Every time, you do it. Come on! Why do you do it?"

Messi seemed stunned by the referee's demand, and continued to stroll back to the centre-circle for kick-off.

The French champions dominated most of the game but were unable to take any of their chances, and were made to pay after a Riyad Mahrez double saw City progress to the final.

And as the game went on, they were getting more and more frustrated, with Di Maria receiving his marching orders after stamping on Fernandinho's foot.

Verratti was clearly animated after the red card decision, and was seen shouting in Kuipers' face.

But afterwards, the Italian midfielder spoke of his shock with the referee's alleged actions.