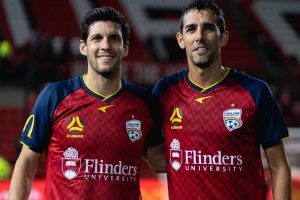 The poise and experience of re-signed Spanish veterans Javi López and Juande will be crucial to Adelaide United’s hopes of remaining alive in the A-League finals series with a win over Brisbane Roar on Sunday.

The Reds received a boost on the eve of the Dolphin Oval clash with the one-year contract extensions signed by former Espanyol utility Lopez and ex-Perth Glory midfielder Juande.

“We also have a great opportunity to do something very special this season as we prepare for our first finals game,” 34-year-old Juande said.

“For me it was an easy decision to stay because firstly I like this club and I also love the change-room because we have a very good group.”

Lopez, 35, said the mid-season arrival from Juande after a stint in the Indian Super League was a factor in his decision to stay with the Reds.

“We love the city of Adelaide and we’re also lucky to have friends here like Juande and his family,” Lopez said.

“My family and me are delighted to be here in Adelaide and we have really enjoyed our time so far.”

Big news out of South Australia with @JaviLopez16 [email protected] commiting to @AdelaideUnited for another season 🇪🇸#ALeague#AUFCpic.twitter.com/goYuFCjGAr

Reds coach Carl Veart tipped the Lopez and Juande to stand tall in the tense atmosphere of the do-or-die match on Sunday.

“They’re very good in the change-room with the players, and (it’s) just their calmness, and that’s going to be very important for us (on Sunday) in the (elimination) final to have that calmness.

“They bring that experience and the other players are looking up to them and seeing what they need to do to get to that level.”

To prevail against Brisbane, the Reds must buck two concerning trends. They have lost all of their nine finals appearances outside South Australia, while the Roar have won nine and drawn one of their 10 finals matches in Queensland.

However, all of those 10 finals games were at Suncorp Stadium, which is no longer the Roar’s home ground after the club’s decision this season to abandon Australia’s best rectangular football stadium to instead play their home games in the Redcliffe suburb of Kippa-Ring.

“We spoke all week to the players about the finals games, they’re different games, they’re one off games, so it’s important that we go there with the right mindset, a mindset that we’re going to go there and play an attacking brand of football and win,” Veart said.

“It’s a one-off game so it doesn’t matter what’s gone on before. On Sunday, the team who turns up and wants to win the most will win.”