Reddy on fire but one blunder opens door for Sydney FC 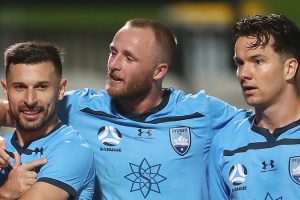 Perth Glory veteran Liam Reddy put on a goalkeeping masterclass but a solitary mistake enabled Sydney FC to notch a vital 1-0 victory and move to within two wins of the A-League summit.

Not for the first time this season, the Sky Blues dominated general play and created the better chances on goal at Netstrata Jubilee Stadium on Wednesday night. 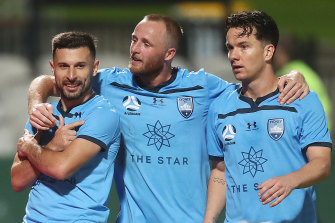 But when they weren’t missing them, it was Reddy turning them away time and again with a string of terrific saves in the first half.

That was, of course, until the greasy conditions at Kogarah, where kick-off was delayed by nearly an hour due to heavy rain and thunderstorms near the ground, undid the 39-year-old’s terrific work.

Nine minutes into the second half, Kosta Barbarouses unleashed a low drive at goal from the right side of Sydney’s attacking penalty box after being fed a pass by Alex Baumjohann.

The Kiwi’s shot took a deflection off a defender, skidded off the turf and squeezed underneath Reddy’s torso – an unfortunate error that proved decisive.

Reddy, who played his junior football down the road in the Sutherland Shire, was otherwise faultless, producing a world-class diving stop late in the first half to deny a goal-bound header from Bobo.

It was one of three key saves in the opening stanza from Reddy, and while he made a handful more in the second half, all it took was one blunder to settle the match in Sydney’s favour.

The game was brought to an end fractionally early, in the final minute of regulation time, after lightning strikes re-emerged and took out the floodlights at the stadium.

Whilst deserving of the win, the Sky Blues have been the A-League’s poorest team in front of goal this season and will be grateful this wasn’t another night of squandered opportunities.

It moves them into fourth spot on the ladder with a game in hand on top-placed Central Coast Mariners, who sit five points clear.

Their next two games at home against fifth-placed Adelaide United and second-placed Melbourne City shape as pivotal to their top-six hopes.

The Glory, in contrast, are back in ninth position, seven points behind Western Sydney Wanderers, who occupy the last of the finals positions.

It could have been an entirely different match for them had the VAR chosen to reverse a non-penalty call in the 25th minute, when Paulo Retre appeared to take out Carlo Armiento’s legs in a challenge while missing the ball completely.

It was not given by the on-field referee and, despite seemingly clear evidence, the original decision was upheld by the VAR.