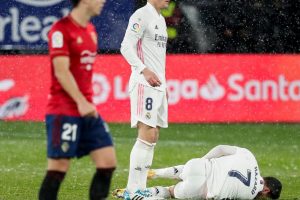 Real Madrid have suffered another blow to their squad ahead of their Champions League tie against Liverpool, with Toni Kroos now set to miss out.

The Spanish giants have endured an injury crisis of their own in recent weeks, with a number of big-name players currently sidelined.

Recently it was confirmed that Eden Hazard was set for another spell on the injury list after suffering from a muscle issue.

The Belgian is unlikely to return before mid-April, and is expected to miss out on both ties against Liverpool.

But Zinedine Zidane's issues don't end there, as it was reported on Tuesday that Federico Valverde might also be unavailable.

The central midfielder, who has been linked with a move to Manchester United this summer, wasn't called up by Uruguay for international duty.

Instead, he remained in Madrid and didn't train on Tuesday with the rest of the squad.

Valverde trained in the gym on his own on Tuesday, leaving doubts over whether he will play against the Reds.

The Spaniard wasn't included in Luis Enrique's squad for the current international break, and was expected to miss at least two months when he went down with a thigh issue in February, meaning it's a race against time for him to play against Liverpool.

Talisman defender Sergio Ramos has been dealing with a knee injury since the start of the year, and made matters worse for himself by suffering an ankle issue earlier this month.

He's not been involved in Spain's squad for the current internationals, but Madrid officials are apparently hopeful that the problem won't keep him sidelined for long.

While Madrid have more players sidelined than Liverpool do, Jurgen Klopp is still having an injury crisis of his own.

The Premier League champions have four players out. Centre-back trio Joel Matip, Virgil van Dijk and Joe Gomez are unlikely to return this season, while Jordan Henderson is unlikely to feature against Madrid.