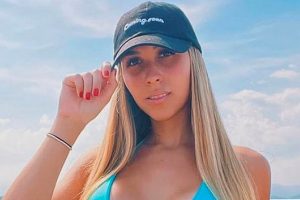 Real Madrid star Rodrygo may have stunned Manchester City fans into silence earlier this week with a dramatic Champions League double, but his stunning girlfriend Luana Atik Lopes showed she is also capable of leaving jaws on the floor with some sexy snaps on social media.

Rodrygo was crowned a hero in Madrid's 3-1 win over Manchester City in the Champions League semi-final on Wednesday. The winger came off the bench to score twice in stoppage time to rescue his side from crashing out of the competition. as Carlo Ancelotti's side won 6-5 on aggregate.

The 21-year-old cleverly tapped home at the front post to get Los Blancos back into the tie and superbly headed home the goal that gave the hosts the lead on the night to tie to take it to extra-time. Karin Benzema then slotted home a penalty to take Carlo Ancelotti's side through to the final in Paris on May 28.

Rodrygo has been in fine form of late, scoring against Chelsea in the quarter-final and netting a double against Espanyol. And perhaps now, it is clear to see who is behind his inspiration. Lopes, 23, took to Instagram to share her latest pictures and left little to the imagination as she posed in her bikini on the beach. On the different photos, she was wearing a blue and black bikini set accompanied by a hat and sunglasses.

The girlfriend of Real Madrid's saviour wowed as she holidayed back in her native Brazil, showing off a series of gorgeous snaps in her swimwear. She captioned one of her photos: "Sun!" after taking photos at a beach in Rio de Janeiro, as she posted to her 36,600 followers on the social media platform, where she shares aspects of her day-to-day life.

HAVE YOUR SAY! What have you made of Rodrygo's time at Real Madrid so far? Have your say in the comment section below…

Despite sharing many photos on social media, Lopes remains private about her personal life. She confirmed her relationship with Rodrygo on Instagram with a picture of the pair together at Fashion Week. However, it remains unknown as to whether she is currently living in Madrid alongside the Bernabeu star.

It is believed the pair met when Rodrygo began his senior career with Santos as a teenager. Lopes, who is two years his senior, attended the University Catholic of Santos and that is where their romance reportedly blossomed before his £45m move to Real Madrid in 2019.

Lopes could not hide her joy for her partner when Madrid were crowned La Liga champions for the 35th time last week. Lopes expressed her pride in her superstar boyfriend and shared a picture of loved-up pair on the pitch at the Santiago Bernabeu.

She added: "Congratulations my love, you deserve it!! I will always be with you, love you." After sharing her saucy snaps, Madrid fans will be hoping to catch a glimpse of her again, especially if the in-form Rodrygo continues to score at his current rate.