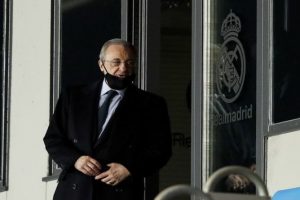 It’s been a summer of change at Real Madrid with Carlo Ancelotti returning to take charge following Zinedine Zidane’s exit. While club president Florentino Perez is yet to introduce a new ‘galactico’ singing’ to Los Blancos supporters, his new transfer plan to sign an elite superstar could impact Premier League giants Liverpool and Manchester United.

Real’s transfer business in the summer window has so far been understated.

Ancelotti has lost two of the club’s greats in Raphael Varane and Sergio Ramos.

The accomplished duo have been recognised as two of the world’s best defenders over the past decade and their departures signal a new era at the Bernabeu.

Ramos will be battling to win the Champions League with PSG after joining on a free transfer, while Varane is ready for a new challenge under Ole Gunnar Solskjaer at Old Trafford.

David Alaba’s move from Bayern Munich remains Real’s only incoming, with the club’s financial issues exacerbated by the pandemic.

But that could soon be about to change, with Perez prioritising moves for reported United and Liverpool targets Erling Haaland and Kylian Mbappe.

Journalist Duncan Castles explained on the Transfer Window Podcast that Perez has devised a plan to sign both of the youngsters, and a move for Mbappe could be accelerated after Lionel Messi’s transfer to PSG was confirmed.

“The information I’ve gathered in the last few days is that Real Madrid have been working on that deal simultaneously with their public pursuit of Kylian Mbappe,” Castles said.

“They want to get that deal done this summer, they’re waiting to see how Messi’s move to PSG shifts that situation.

“If they can’t do it in this window, they want to bring in Mbappe next summer.

Real’s interest in the duo could force United and Liverpool into transfer battles in the coming months.

Jurgen Klopp’s Reds continue to be linked to Mbappe, who has entered the final 12 months of his contract.

Marca claim Liverpool have already enquired about the French World Cup winner, who could evolve the front three at Anfield.

Perez’s apparent desire to complete a move for Mbappe this summer could stop Liverpool pursuing Mbappe, as a move for the 22-year-old may be seen as financially unviable without him running his contract down and being available on a free transfer.

Meanwhile, Haaland is seen as the ideal striker target for United next summer as Solskjaer aims to expedite his plans to make the Red Devils contenders on all fronts.

The Manchester Evening News have reported that Solskjaer remains interested in his Norwegian compatriot, whom he coached at Molde but opted to reject United for Borussia Dortmund last year.

But should Perez also sanction a sensational swoop for Haaland, United could risk losing out on one of the world’s most coveted strikers for a second time.

Both Premier League sides may be waiting on the next move in the Spanish capital as they work out their own long-term transfer plans.

Do you want an exclusive pre-season preview for YOUR club – both in your inbox and through your letterbox? Head over here to find out more and secure your copy