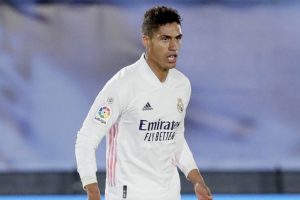 Real Madrid are fully prepared for Raphael Varane’s departure this summer. The Spanish giants have known for some time that a move to Manchester United could be on the cards for the Frenchman and have already planned for his exit.

United have tried to sign Varane on two occasions previously and it seems like it could be a case of third time lucky this summer.

Sir Alex Ferguson personally led the club’s pursuit of Varane when he was still at Lens in 2011, but Zinedine Zidane was instrumental in persuading him to join Real Madrid instead.

Those efforts ended in disappointment but United have been encouraged since March that things would be different in 2021.

Reports suggested then that Real would be open to selling Varane this summer, rather than lose him for free when his contract expires in 2022.

Varane turned down the offer of a new contract with Real and is understood to be interested in beginning a new challenge with a new club.

Paris Saint-Germain emerged as a potential destination, but after the French side signed Sergio Ramos, United became the most likely suitor.

United have reportedly made good progress in the past week or so, with the Manchester Evening News reporting on Monday that they are ‘inching closer every day’.

Ole Gunnar Solskjaer’s side remain calm about the situation, with Varane currently on holiday with his family following Euro 2020.

Everton to announce next two signings as Townsend confirmed

Real Madrid are holding out for the best possible transfer fee, but are in no rush, partly because Carlo Ancelotti is happy with his current options in central defence.

Marca reports that Real ‘shouldn’t have too much to worry about defensively’ because they have Eder Militao, Nacho and new arrival David Alaba, as well as some homegrown talent, to call upon next season.

Militao came to the fore last season when Varane or Ramos were not available, while Nacho has been a dependable player for the club for some time.

Alaba has been brought in on a five-year contract from Bayern Munich and will reportedly earn £10.5m per year.

The Austrian is already established as a top quality player and will fill the boots of Varane in the 2021/22 campaign.