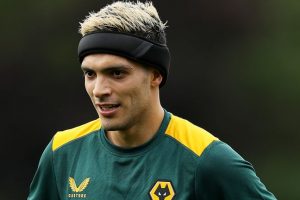 Jimenez, who will wear a specially-designed headguard for heading, full-contact training and matches, has been a full participant since Wolves returned for pre-season training on Monday.

The Mexico international was cleared to train fully back in May but had to wait until this week to be reunited with team-mates and meet new head coach Bruno Lage.

Jimenez is expected to be in contention for Wolves’ pre-season campaign, which begins against Crewe Alexandra on July 17.

The 30-year-old received on-field treatment for 10 minutes and was carried off on a stretcher after an accidental clash of heads with Arsenal defender David Luiz last year.

He was given oxygen on the pitch before being taken to St Mary’s Hospital Paddington, where he had emergency surgery for a major traumatic brain injury (TBI) and skull fracture.

Jimenez underwent tests in May, which revealed his skull fracture had healed well. He will need to wear a protective headguard for the remainder of his career.

Wolves signed Jimenez for £30m from Benfica in August 2019 after an initial season-long loan and he signed a new four-year deal last October.

He has scored 48 goals in a total of 110 appearances for the club in all competitions, netting four times in nine Premier League appearances last season before his injury.