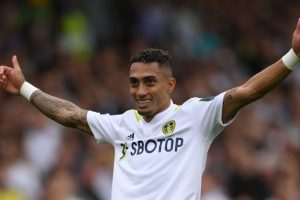 Raphinha will force through a summer move to Barcelona even if Leeds avoid the drop, according to reports.

Raphinha, 25, has been one the few bright spots in a difficult season for the Whites, who are still embroiled in a relegation battle. But even if Jesse Marsche's side remain in the top-flight next season, it might not be enough to keep the Brazilian at Elland Road.

According to Spanish publication Sport, Raphinha is focused on keeping Leeds in the Premier League for a third consecutive season. It adds the midfielder is grateful to the club for 'opening the door to the Premier League' for him.

However, the Samba star is said to be planning to 'force whatever is necessary' to guarantee a move to the Nou Camp, regardless of what division Leeds are in next season.

A deal for the Raphinha will not come cheap for the Catalan giants, with the report stating that the Whites would demand a fee in the neighbourhood of £34million to let him go.

Do you think Raphinha is good enough to play for Barcelona? Let us know your thoughts in the comments section below. That would make him the second most expensive sale in the Leeds' history, behind only Rio Ferdinand's £41.4m move to Manchester United in 2002.

The player's agent, Deco, is reported to be a 'key figure in the entire operation.' It is alleged he proposed Raphinha to the Barcelona board, with a move already sanctioned by Barca manager Xavi.

As it stands, though, Raphinha is still a Leeds player, and his aim is to keep the Whites in the Premier League. The Yorkshire side had been on a good run of form under Marsch before last week's 4-0 mauling at Manchester United.

Recent wins for Everton and Burnley have put the pressure on Leeds, who remain just outside of the relegation zone with only a few more games to go until the end of the season.