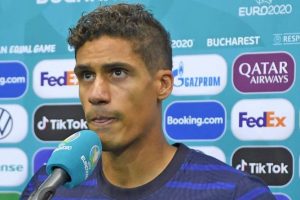 Varane trains in quarantine ahead of Man Utd move

Raphael Varane will wear an ‘unexpected’ shirt number at Manchester United, it has been claimed. The Real Madrid star recently underwent his medical with the Red Devils. And he’s poised to become their third signing of the summer transfer window.

Manchester United are a club who mean business this summer.

Tom Heaton was the first player to walk through the door, with the former Aston Villa star arriving on a free transfer.

United then spent £73million on prising Jadon Sancho away from Borussia Dortmund, with the England star moving four years after Jose Mourinho first tried to snap him up.

And, at the end of July, the club announced they’d agreed a deal in principle with Real Madrid for the signing of Varane.

Since then, it’s been slow progress.

The 2018 World Cup winner had to wait for his visa to be sorted and he’s recently undergone his medical with the club after arriving in Manchester.

United are expected to officially announce his arrival imminently, with the club preparing a presentation behind the scenes.

And Stretty News claim the Red Devils will give Varane an ‘unexpected’ shirt number.

It’s claimed Phil Jones will be keeping the No 4 jersey, which he’s donned ever since his move from Blackburn Rovers in 2011.

And there are several options available to Varane.

One choice is the No 16 shirt, which has previously been sported by club legends Michael Carrick and Roy Keane over the years.

The No 12 is available, too, having been vacant ever since Chris Smalling’s move to Roma back in the summer transfer window of 2019.

And the No 15 is another possibility with Andreas Pereira expected to be sold before the transfer window shuts in two weeks’ time.

United had originally been intending to make more signings after Varane, Sancho and Heaton.

But they appear to have changed their stance, now, with deals for Ruben Neves, Saul Niguez and Kieran Trippier currently dead in the water.

Meanwhile, former Manchester City star Danny Mills has doubled down on his claim that Varane could struggle in the Premier League.

“If all those other teams [in the Premier League] are getting stronger, they’re more likely to take points off Manchester United as well,” the former Manchester City and England right-back told talkSPORT.

“Their away record, Manchester United, was superb [last season], wasn’t it? I don’t think that’s going to be the same [in the coming season] with fans back in grounds and everything else that’s happening.

“So, yes he’s a good signing. But was it the right signing?

“You know, Varane is a good player, but again we don’t know what he’s gonna be like, how robust he’s gonna be in the Premier League week in, week out.”

And Mills, speaking exclusively to Ladbrokes at its launch of the 5-a-side Bet on Man United v Leeds, has now backed up his previous comments.

“Raphael Varane is a fantastic player who has won everything, but the Premier League is completely different, and a lot of top, top players have come here and struggled,” he said.

“Sometimes it can take a little bit of time for these players to adjust and work things out.

“If you go and sign an English player who has been playing in the Premier League for two or three seasons, you can more or less guarantee you know what you’re going to get from him.

“When you sign a player who has been playing alongside Sergio Ramos for the majority of the career, and you take him away from that environment and put him in the Premier League with a new partner and they come up against Burnley, Southampton, Everton, all of those teams – you don’t know how it’s going to go.

“I’m not doubting Varane’s ability for a second; all I’m doing is asking whether it’s going to work out instantly, because so often we’ve seen it hasn’t.”