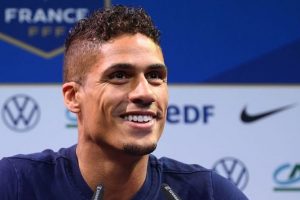 Varane: All you need to know about Man Utd-linked defender

Manchester United’s hopes of signing Raphael Varane this summer hang by a threat after reports emerged that the Real Madrid centre-back is set to meet with the Spanish club about his future. Varane is entering the last year of his contract in Madrid.

Varane appears to be unsettled in Madrid following the departure of manager Zinedine Zidane, and has not signed a contract extension to his deal, which is entering its final year this summer.

United want Varane, but are wary of paying such a high fee so soon after splashing out on the signing of Jadon Sancho.

And a report in the Guardian suggests that United may not get the opportunity to sign the France centre-back in any case.

Varane is currently on holiday and the report claims a decision will be made by the defender once he returns and sits down with Los Blancos to talk out his future.

It’s claimed Varane does not want to go against Real Madrid’s wishes after spending a decade with the club.

Instead he will wait to see what happens in talks between his current employers and United and will see if Real show a willingness to do business.

Varane is one of the top-rated centre-halves in world football and is United’s top target this summer.

“[Maguire and Varane] could be a very good pairing and they could work very well together because he’s an international player, he has experience,” Leboeuf told ESPN.

Another reason why Real Madrid are reticent to rush into a deal to sell Varane is because the Spanish club have already allowed veteran Sergio Ramos to leave this summer.

United failed to signing Ramos when the 35-year-old joined Paris Saint-Germain on a free transfer earlier this month, and Leboeuf believes that United have already missed out on the better of the two defenders.

“I like Varane he showed during the World Cup of 2018 he was capable of leading the defence and doing a great job,” the former Chelsea centre-back said.

“But I’m sorry, we’re talking about Ramos and without Ramos Real Madrid’s defence wasn’t the same last season and Varane was leading that defence, so I still have some question marks.”
Source: Read Full Article