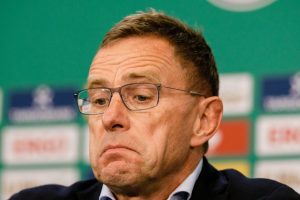 Ralf Rangnick is poised to ride to the rescue of Manchester United and become the club's new interim boss.

United have identified Rangnick as the No.1 choice to succeed Ole Gunnar Solskjaer, who was sacked last weekend following the shock 4-1 at Watford.

Rangnick, who is known as the "Godfather of German Football", will be handed a six month deal, including huge bonuses to get United into the top four and win the Champions League.

And United bosses are planning to make Rangnick the club's first 'Sporting Director' once he has finished his stint as interim boss.

The plan will see Rangnick step aside at the end of the season to allow Maurcio Pochettino or Brendan Rodgers to be appointed permanent manager next summer. He will then work in tandem with the new man in the dug out.

United executive vice chairman Ed Woodward is negotiating compensation with Lokomotiv Moscow, where Rangnick has been working as sporting director.

Rangnick, 63, has told Lokomotiv he wants to take up the new role at United and the Russian club will not stand in his way.

But former Hannover, Schalke, Hoffenheim and RB Leipzig boss Rangnick will not take charge of the team for Saturday's trip to Chelsea due to work permit reasons.

Caretaker manager Michael Carrick will lead United at Stamford Bridge and is expected to be retained as part of Rangnick's coaching staff.

United have chosen to appoint an interim boss to give them a period of stability – and more time to land their main managerial target, with Pochettino the preferred choice.

United have not approached Paris Saint Germain for permission to speak to Pochettino, but will begin the recruitment process in the New Year and are confident of landing him ahead of next season.