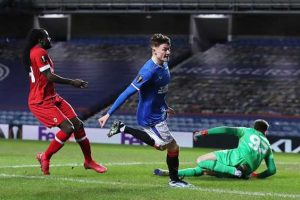 Nathan Patterson made amends for his Covid rule-breach as his first Rangers goal helped fire Steven Gerrard’s team back to the Europa League’s last-16 with a 5-2 win over Royal Antwerp.

The Ibrox teenager found himself feeling the wrath of his manager and the Light Blues legions after being caught at an illegal house party with four team-mates earlier this month.

But he repaired some of that damage as he slotted home just 16 seconds after climbing off the bench at half-time as Rangers progressed after a high-scoring thriller with the Belgians.

Patterson is still likely to be hammered with a hefty ban from the SFA but he will be free to fill in for injured skipper James Tavernier in the next round after helping Gerrard’s team clinch their place in Friday’s midday draw with a crazy 9-5 aggregate triumph.

Patterson was back on the bench along with Calvin Bassey and Bongani Zungu following their 10-day quarantine after Covid-19 breaches, while Glen Kamara came in for Ryan Jack.

Last week’s clash had the Ibrox faithful gasping for breath as their team edged out a seven-goal classic.

And it did not take Rangers long for them to quicken the fans’ heart rates again as they raced out of the blocks.

Kent had two great chances to give Rangers the perfect start inside eight minutes.

But the former Liverpool wideman did come up with an assist as Gers got the perfect start they were after just 60 seconds later.

Connor Goldson’s long ball put Antwerp on the back foot. Ianis Hagi led the press but it was Jeremy Gelin who was caught unawares as Kent stole in to intercept his back pass to the goalkeeper.

With Ortwin De Wolf caught in no-man’s land, Kent cut back for Morelos to knock into the empty net and Rangers looked in total control.

The opener was a snap shot of Gerrard’s approach, with the front three’s relentless pressing causing panic in the Belgian ranks.

However, Maxime Le Marchand identified skipper James Tavernier’s absence at right-back a potential area for Antwerp to exploit and that is the route they took to regain some hope.

Leon Balogun looked uncomfortable deputising for the skipper as Jordan Lukaku put in a cross from which Aurelio Buta swept wide.

It was a warning Rangers failed to heed as Antwerp did pull one back on 31 minutes.

Lukaku chopped one way then the other to twist past Balogun before sweeping in a low cross for Refaelov, who nudged past Allan McGregor at the front post.

Balogun was then booked foul on Lamkel Ze that now rules him out of Gers’ next European clash.

And when the Nigeria international went to ground too easily yet again as he allowed Lukaku to fire into the side netting just before the break, it was the signal for Gerrard that a change was needed.

The manager gave Patterson his chance to repair the damage he did with his house-party antics – and it took the 19-year-old just 16 seconds to repay his boss’ show of faith.

Gers kicked off before Kamara fired the ball up to Hagi. Morelos took the ball on as he slotted a sublime measured pass in behind the Belgians and Patterson kept his cool to fire into the far corner.

Kent then capped off a stunning move on 55 minutes. Kamara and Hagi worked the ball to Morelos who drove past Martin Hongla before returning the first-half favour with a precise pick-out for Kent to fire home the third.

But Antwerp refused to lie down and pulled another goal back two minutes later as Lamkel Ze raced through to score from a tight angle as McGregor and Goldson collided while chasing Refaelov’s lofted pass.

However, Rangers refused to panic and marched into the last 16 for the second year running as Barisic smashed home two late spot-kicks after Morelos and Scott Wright were both tripped in the box.