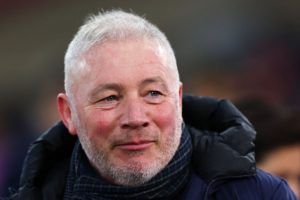 James Tavernier levelled the tie on aggregate after 18 minutes, scoring at the back post from Ryan Kent’s low cross. Glen Kamara then put Rangers in the lead for the first time just six minutes later.

Manchester United target Christopher Nkunku tied the two sides again on 70 minutes before John Lundstram scored the goal to send Rangers through to the final.

Speaking to talkSPORT, McCoist said: “Quite literally nine years ago Rangers were lifting the third division championship against Berwick Rangers. Nine years on you’re in a European final in Seville against Eintracht Frankfurt.

“I’m stunned and so happy for absolutely everybody. The atmosphere last night was just ridiculous, it was off the scale. Celtic and Rangers make no mistake, they’re the two best teams up here by a country mile. But where they want to play and where they want to do their stuff and where they will be judged effectively, is in Europe. There is no doubt about that.

“That’s where they want to strut their stuff and for Celtic and Rangers to have an opportunity to play at the top level, earn a few quid, it’s just magic. I’ve heard the old stadium many a time over the years, Bayern Munich in 1972, Dynamo Kyiv in 1987, Leeds in 1992, but that was as good as any last night.”

Rangers defied the odds to defeat RB Leipzig, as Tavernier’s seventh goal of the competition set them on their way. Kamara steered the ball home into the corner before Lundstrum sent Ibrox into raptures with his goal with ten minutes to spare.

The route to Rangers’ first European final for 14 years began in the qualifying stages, squeezing past Armenian side Alashkert 1-0 on aggregate.

They finished as runners-up in Group A to Lyon, pipping Sparta Prague by a point. They were drawn against German giants Borussia Dortmund in the knockout round play-offs.

The Gers stunned the Westfalenstadion crowd with a 4-2 win in Germany, before completing the job with a 2-2 draw in Scotland.

A 3-0 first leg win at home to Red Star Belgrade ensured Rangers’ place in the next round, despite losing 2-1 in Serbia as they set up a round of 16 tie with Braga.

Rangers had to come from behind as they lost 1-0 in Portugal in the first leg, but a 3-1 win at Ibrox ensured them a place in the semi-finals.

Rangers will face Eintracht Frankfurt in the Europa League final on May 18.