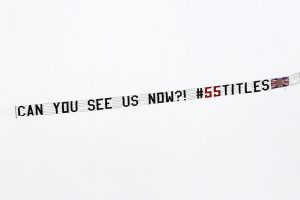 Rangers are champions of Scotland for the first time in ten years, and their fans marked the occasion by causing havoc during Celtic's game against St Mirren.

Celtic needed to win against Dundee United on Sunday in order to keep their slim title hopes alive.

Steven Gerrard's side beat St Mirren 3-0 on Saturday to put themselves within touching distance of the title.

And afterwards, they celebrated like league champions, with videos showing the team dancing and drinking in the dressing room at Ibrox.

Gerrard was even filmed sliding through a river of beer in the dressing room, while there were suggestions on social media that the manager had organised for a delivery of beer to the ground for his players. Rangers fans weren't allowed into the stadium for Saturday's game, but that didn't stop them congregating outside.

And they carried the celebrations over to Sunday by hijacking Celtic's trip to Dundee.

First, they flew a plane over the stadium with a message saying: "Can you see us now?! #55titles" during the match. While the plane didn't cause the game to be suspended, the Rangers fans weren't done yet.

The game had to be suspended during the second half after supporters threw smoke bombs over the stands and onto the pitch.

The referee had to pause the game just before the hour mark after orange and white smoke bombs were pelted onto the field. The match was quickly resumed, however, but the defending champions were still unable to find a breakthrough.

Celtic's failure to beat Dundee means they have now officially ended their bid for a tenth Scottish Premiership title in a row.

It is the first time since Rangers' insolvency that they have been able to topple the Hoops.