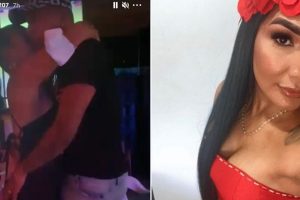 Four years in Scotland have proved there aren’t many who can keep Alfredo Morelos in check, but wife Yesenia may be one of the few people able to maintain the Rangers star’s undivided attention.

That’s after Morelos was recorded dancing intimately with his partner while they soak up the last of his summer holidays before heading back to Glasgow for pre-season training.

The fiery-tempered frontman was part of the Colombia squad that ran to third at this summer’s Copa America—their joint-best finish in the past six tournaments—although he only played nine minutes.

And wife Yesenia uploaded an Instagram story showing her hubbie clinging onto her while they danced at a party in their native Colombia.

The pair are due to return to Glasgow shortly but were clearly enjoying themselves in Mayapo La Guajira Colombia, where they’ve been holidaying.

Morelos and Yesenia wed back in 2016 and share a one-year-old daughter, Leonela.

The prolific hitman can be seen holding his partner tightly in the video, and Yesenia has her arms draped over her beau’s shoulders while they move in motion with the music.

Do you think Alfredo Morelos will guide Rangers to another Scottish league title in 2021/22? Let us know in the comments section.

Despite his lack of involvement at the 2021 Copa America, Morelos is expected to return and play a key role for Rangers as they target back-to-back Scottish Premiership titles.

Steven Gerrard’s side went unbeaten as they clinched their first league crown in a decade last term, knocking Celtic off Scotland’s perch and finishing 25 points clear at the top of the table.

Rangers also made it to the Europa League round of 16 for the second season in succession.

The South American star received a tongue-in-cheek response from manager Gerrard after wishing him a happy birthday at the end of May.

Morelos posted a tribute to his boss along with the caption: "I want to wish a happy birthday to the best coach in Scotland.”

Not content with being the best in the country, Gerrard first replied simply “Amigo,” before circling back to question "Just Scotland", then joking "Europe? World?”

Morelos has received six red cards in 109 Scottish Premiership appearances to date, an average of one dismissal every 18 appearances or so.

Gerrard will hope a summer of distraction elsewhere will help his star rein in that average and focus his efforts on scoring—on the field, that is.