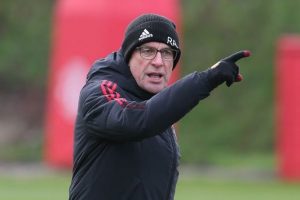 Manchester United interim manager Ralf Rangnick has been the ‘talk of the training ground’ this week after a humiliating blunder. On Tuesday, Rangnick turned up to Carrington ready to take another day of training but forgot he had given his players the day off and immediately made a U-turn home.

The German coach will be eager to continue drilling his philosophy into the United squad, but he was evidently too keen earlier this week.

On Monday, his side defeated Aston Villa 1-0 in a hard-fought FA Cup third-round clash at Old Trafford.

But Steven Gerrard’s visitors had their share of chances, and United were somewhat fortunate to progress without conceding.

And with a trip to Villa on the agenda on Saturday, Rangnick reportedly tried to begin preparations a day too early.

According to the Mail, the 63-year-old turned up at Carrington to find the training ground deserted.

After noticing there were no players or staff members present at the Covid testing unit in the car park, he rang inside to ask where the testers were.

But Rangnick was reminded that it was the players’ day off, and he returned home immediately afterwards.

Word of his mistake quickly spread around the dressing room, with a club insider stating that ‘the players were all joking about it’.

The report also notes that some players weren’t quite as joyous about their training schedule leading up to the winter break at the end of January.

Rangnick will continue to start training sessions at 2pm, which isn’t a popular time in the dressing room.

However, they will also be disappointed as that is now unlikely to go ahead amid fears over Covid, and Rangnick could use the time to continue to work at Carrington.

After starting 2022 with a 1-0 home defeat to Wolves, United must return to the course in the race for a top-four spot this season.

The Red Devils travel to Brentford next week between the trip to Villa and the crucial Champions League six-pointer against West Ham.

After having plenty of time on the training pitch across the past two weeks, Rangnick will hope to see improvements throughout his team at Villa Park on Saturday evening.