Rafael Benitez ‘tells James Rodriguez he is not needed at Everton’ 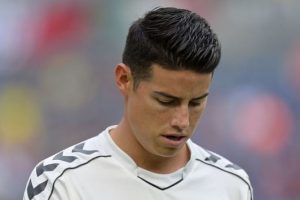 Rafael Benitez is said to have told James Rodriguez that he is no longer needed at Everton, according to reports in Spain. The Colombian playmaker only arrived at Goodison Park last summer, joining on a free transfer from Real Madrid.

He did not take any time to settle into his new surroundings either and looked a serious contender for signing of the summer in the opening weeks of the season.

Yet he would manage just three more goals and one assist in the final 33 matches of the season after suffering from a number of injury problems.

Carlo Ancelotti, who has signed him on three occasions, has since departed Everton to return to Real Madrid.

He was replaced by another one of Rodriguez’s former bosses in Benitez, was a controversial appointment a matter of weeks ago.

Benitez has already raised questions over the attacking midfielder’s fitness levels when speaking to the press at the Florida Cup in Orlando.

Now reports from El Chiringuito’s Edu Aguirre and Sky Italia’s Matteo Moretto suggest Benitez has told Rodriguez he is no longer required at the club.

At the start of the window, it was no secret that Everton would consider offers for Rodriguez if they arrived.

The player was said to be keen on a new challenge after Ancelotti’s departure but his morale has been positive during pre-season.

Benitez recently admitted he was expecting to see James in better shape just a few weeks out from the Premier League season.

“At the beginning of the pre-season, it is not easy,” Benitez said. “I think you can see he has the quality on the ball but still his fitness is not what we are expecting, so it is normal at this time.

“So we will see, obviously, we have more training sessions and more games so we will see how he is going on and every player.

“It depends on them, if they can make a difference or not. But at the moment it is seeing how they progress and how they can improve but nobody can argue about the quality of James.”

One player who has made an impression on Benitez is free signing Andros Townsend.

The former Crystal Palace man has looked sharp during the club’s United States tour, both in training and matches.

“He’s someone who I know from my time at Newcastle. He’s a player with quality,” Benitez added.

“I was checking his fitness stats, too, and he was one of the best players in the Premier League in terms of work rate.

“We have a player who can give us something more because he has the desire and he’s in a position that the team needed. I think he can do well for us.”