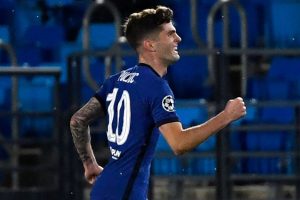 Christian Pulisic has become the first United States men’s international to score a goal in a Champions League semifinal, after netting in the first half of Chelsea’s 1-1 tie with Real Madrid.

The goal was also Pulisic’s fifth in the Champions League, moving him ahead of DaMarcus Beasley on the all-time U.S. men’s scoring list in European football’s premier competition.

Pulisic found himself alone in the penalty area on 14 minutes and cut to his right, beating Real Madrid keeper Thibaut Courtois and firing between two defenders to give Chelsea an early lead.

The 22-year-old also scored in the knockout round in 2017 when he was still with Dortmund and is now the youngest player to score for Chelsea in the semifinals of the UCL or later, passing Ramires, who did it at 25 years old against Barcelona in 2012.

Adding to the list of firsts for Pulisic, he is also now the first U.S. international to score in any competition against Real Madrid.

Puliisic has battled injuries throughout his career and Chelsea manager Thomas Tuchel claimed earlier this month that he needed to learn to trust his body again after suffering nagging issues dating back to a hamstring problem sustained in last August’s FA Cup Final defeat to Arsenal.

Tuchel’s first game in charge took place on Jan. 27 against Wolves, but Pulisic did not start a Premier League game until March 13.

However, the 22-year-old has started six of Chelsea’s last eight matches across all competitions and he said prior to the Madrid match: “I feel very confident in my body and my fitness level at the moment. I have played a string of games.

“I’ve never thought of myself as a player who is injury prone or anything. Obviously I had some time out in the past year and a bit. It is really just about taking care of my body and putting myself in the best position to be available for every single game. I feel good about that right now.”