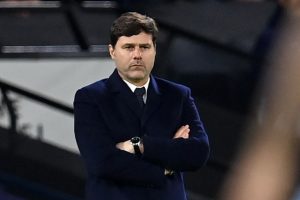 Mauricio Pochettino is said to be unhappy in his job with Paris Saint-Germain – and on the evidence of tonight’s game against Manchester City it is easy to see why.

Perhaps more than any other European super club, PSG are a brand with a football team attached.

They are far from the only club to have vast wealth – you only had to look at Wednesday night’s opponents to see that.

But unlike Manchester City, PSG’s club ethos is reflected on the pitch. While City are a reflection of their manager, Pep Guardiola, PSG are less hard to define.

While centre-backs Marquinhos and Presnel Kimpembe show all that is good about the team – an old school battling quality and sheer determination to win – the club’s high-fashion, free-flowing vibes dominate further up the pitch.

Pochettino fielded a front three of Lionel Messi, Neymar and Kylian Mbappe at the Etihad Stadium in a match which was billed as a mouth-watering Champions League, but thanks to the score in the other game in Group A, became largely null-and-void.

RB Leipzig were 4-0 up at half-time against Club Bruges, meaning both Man City and PSG were all-but assured of their progression to the last-16 regardless of the result.

This, therefore, was an exhibition match – and PSG’s front three certainly lived up to the billing. Man City knew what to expect, having dominated every aspect of the first leg between the two sides, only to lose 2-0 in Paris.

And given it had worked before, maybe PSG’s big three simply thought they would take the same approach to this game.

Pochettino is said to be fed up with living in a hotel room in the French capital while his family are in London and has reportedly told close friends he is desperate to return to the Premier League.

Maybe that desire is born out of loneliness. But maybe it is also the result of trying to get Messi, Neymar and Mbappe to do as he asks for 90 minutes.

The trio of superstars are fantastic in possession, as we saw when they combined to give PSG the lead through Mbappe’s low drive after 50 minutes, but they are less than good when they don’t have the ball.

Man City absolutely battered the visitors in the first half. They penned them into their own box and bombarded them. Only some last-ditch blokes from Kimpembe and Co, some saves from Keylor Navas and a wayward finish from Ilkay Gundogan saved them.

After Mbappe’s opener their luck ran out. City’s cross-field passes had been killing PSG all game and finally one lead to a goal.

Rodri picked out Kyle Walker and his volleyed cross found its way to Raheem Sterling to poke in for 1-1.

The trick was repeated on the opposite flank after 76 minutes, this time it was Bernardo Silva who set up Gabriel Jesus to score.

Needing to get back into the game Pochettino brought on Angel Di Maria for holding midfielder Idrissa Gueye, adding another stray attacker to the mix.

It did not have the desired effect, as Guardiola's relentlessly-drilled side used their scientific approach to smother their artistic opponents.

PSG will fly back to Paris and prepare for the last-16. But will Pochettino be back in Manchester sooner than his players?

Pochettino is reportedly keen on the United job and a return to the Premier League – and on this evidence he would be a good fit for the Old Trafford dugout.

HAVE YOUR SAY! What did you make of PSG's performance? Would Pochettino be a good fit for Man Utd? Comment below.

The Argentine built his reputation as a hard-pressing, hard-working structural coach with Southampton and Tottenham.

But the PSG role has shown another string to his bow: dealing with egos and building a tactical system which can accommodate them.

Recent events at Manchester United would suggest that could be quite useful. For Lionel Messi, read Cristiano Ronaldo. For Neymar, read Bruno Fernandes. And so on.

United likely want Pochettino based on his body of work over five years with Tottenham. But his most recent work with PSG may actually be more applicable.