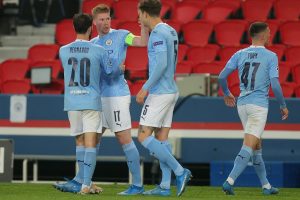 Kevin De Bruyne revealed that Pep Guardiola asked Manchester City’s players to slow their play down and hold onto the ball before inspiring their second-half comeback in Paris.

City will take two away goals into next week’s Champions League semi-final second leg after beating Paris Saint-Germain 2-1 at the Parc des Princes.

When asked what Guardiola told the players at half time, De Bruyne said: “Just play a little bit more with the ball.

“In the first half we were a little bit too rushed and we wanted to go forward too quickly and that is not the way that we are set up as a team.

“In the second half we did really well and we tried to find the spaces more patiently and we did that, they are a tough team to play against and the progression we made as a team was good.”

De Bruyne admitted that it had been “a game of two halves” and that City had struggled to contain PSG during the opening stages.

Yet in response, City changed the way they pressed their opponents, according to De Bruyne, and he was delighted with their second half performance.

“We started well in the first 10 minutes. We had some control but they are an unbelievable team and have great quality up front and it’s a shame about the way we conceded.

“After that they had a couple of small chances but after 25 minutes we changed the way we pressed them and it became better.

“We had a couple of good opportunities, especially the one with phil but the second half was much better, we put them under pressure.

“The way the first goal goes in is a bit lucky but we played great football in the second half and we did well there.”