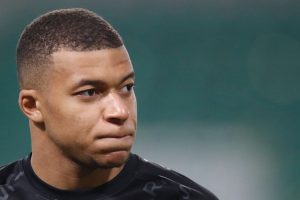 Paris Saint-Germain have named their asking price for superstar forward Kylian Mbappe, according to reports in France.

Mbappe showed why he is considered one of the most electric and talented players in Europe by scoring a stunning hat-trick at Barcelona on Tuesday night.

The Frenchman pulled PSG level after Lionel Messi opened the scoring at Camp Nou, and went on to score twice in the second half on a famous night for the visitors.

Though PSG hope they will enjoy many more years with Mbappe in their forward line, they are well aware his contract expires in the summer of 2022.

This means Mbappe will have just one year remaining on his deal come this summer, but the Ligue 1 giants will demand a monstrous fee of at least €200million (£174m) for his services.

That's according to Le Parisien , which adds the four clubs pursuing the 22-year-old are Liverpool, Real Madrid, Manchester City and Juventus – should Cristiano Ronald leave the Turin club.

Should Liverpool fork out £174million to sign Kylian Mbappe? Have your say in the comments.

Nonetheless, the Reds are not "put off" by the vast sum of money, as they "theoretically have the funds" or the "powerful shareholders" required to seal the transfer.

The report adds Liverpool's rivals for Mbappe are similarly well-positioned and could summon the funds required for the transfer fee and Mbappe's £500,000-per-week wage demands.

Meanwhile, PSG still hope Mbappe will sign a contract extension at Parc des Princes, though the former Monaco man is yet to make a decision on his future.

After his stunning display in Catalonia, he insisted he would not rush into a decision in the heat of the moment.

"It would be stupid to decide my future on a single match," Mbappe told RMC Sport . "The truth is that it is about reflecting for the long term. I have always said that I am happy here. This sort of match makes me even happier."