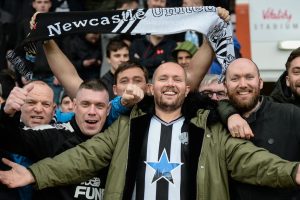 Newcastle United fans are tearing their hair out watching their beloved Magpies with 49% reporting that they are bald or balding.

The Toon Army are head and shoulders above the national average for baldness – not that they require the shampoo of the same name.

Given those numbers, it shouldn’t come as too much of a surprise that Magpies fans top the coveted Premier League baldness table.

Their hair-to-head radio is the lowest in the top-flight, putting them well above the division’s bald bonce average, which stands at 30%.

Researchers for BuzzBingo.com found that supporters believe the constant threat of relegation is the main cause of their hair falling out.

Overall, 5% of Premier League fans admitted to following the approach of Antonio Conte by receiving treatment to save their ailing locks.

Others took a more cut and dried approach, with 20% whipping out the shaver and going for a 0 all over at the first sign of thinning hair.

10% of supporters said they grew a beard to try and distract from their threadbare noggin’ – but we all know they’re not fooling anyone.

After Newcastle, Liverpool rank as the second biggest baldies with 47% owning up to having a dome shinier than polished chrome.

Chelsea rank third on 42%, with Tottenham Hotspur completing the follicly-challenged top-four on 41%.

Everton and Aston Villa make-up the top-six, while fed-up fans of relegated Fulham are up in seventh.

Further down the table, Manchester United fans came eighth with 36% of supporters reporting a breeze where their hair should be.

Meanwhile, the supporters most likely to still require the services of a barber are those of Leicester City and Wolverhampton Wanderers. The two clubs are in joint-16th place with just 16% of their fans going thin on top.

Spokesman Rich Kearns said: “We were stunned to find around 30 per cent of Premiership fans are bald.

“But maybe it should be no surprise considering the stress involved – particularly at this time of year when relegation battles are being decided.

“If you are a Fulham, West Brom or Sheffield United fan you have the perfect excuse this year for losing your hair.

“And it seems Newcastle's season-long battle to avoid relegation taken an even greater toll on its fans.”

Brighton and Hove Albion – 21 per cent