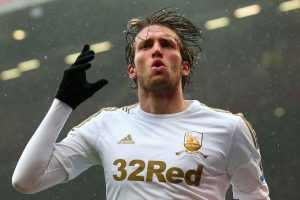 While everyone can list many of the finest footballers to ply their trade in the Premier League since its inception, just shy of three decades ago, there is arguably a more entertaining discussion to be had over the talent that is often forgot.

The exploits of the likes of Thierry Henry, Cristiano Ronaldo and Steven Gerrard have been dissected a number of times, but for every Henry, there is a Michu, every Ronaldo an Amr Zaki and every Gerrard a Robinho.

The cult status some of the lesser known talents to arrive on these shores have made for themselves after just one campaign of excellence is remarkable, such is the power of the one-season wonder.

With that being said, Star Sport has taken a look at seven of the most talented players to strut their stuff in such a short space of time…

In the eyes of many, the most iconic one-season wonder of them all. Signed from Spanish outfit Rayo Vallecano in the summer window of 2012, Swansea were riding high after surviving their first campaign in the Premier League.

What happened the following term lives long in the memory of all who witnessed it, with Michu bagging a brace on his debut as the Welsh outfit battered QPR 5-0, the Spaniard also registering an assist.

Quick to prove it wasn't a fluke, Michu went on to find the net six times in his opening eight games, a further seven taking his tally to 13 before the Christmas period.

A new four-year deal swiftly followed, such was Swansea's desperation to keep the striker at the Liberty Stadium.

Michu's goal-scoring exploits in the league cup helped fire the Swans to their first ever major trophy, but his second season would fall remarkably short of his debut campaign.

He would eventually fail to see out the full four years of his deal, reaching a settlement in the final year to return to his home country.

Who is the best one-season wonder? Let us know in the comments section.

Famously quoted as saying he thought he was signing for Manchester United, Robinho's time in the blue half of Manchester did not go as well as hoped.

However, the Brazilian did hit the ground running during his first term at the Etihad, bagging 14 goals and even earning the right to don the captain's armband in the absence of Richard Dunne.

Bizarrely, as City continued on their upwards trajectory, Robinho's stock seemed to fall further than ever before.

His second season saw him fail to find the net for 10 games running ahead of the period of festive fixtures, before he was allowed to return to Brazil for a loan spell with Santos.

The temporary stint was a success, so much so that A.C. Milan were willing to take a punt on the forward, who joined the Italian giants in a deal that saw City earn less than half of what they paid for the attacker in 2008.

Unlike the previously mentioned duo, Benjani actually started his spell in England very slowly, with little to note for his opening campaign before exploding into life the following season.

After notching just six goals in his debut campaign for Portsmouth in 2006/07, his 2007/08 efforts saw Benjani hit more than double that figure including two hat-tricks.

The newly cash rich Man City were the winners in the race for his signature, though this was unwelcome news to the striker himself, who was so against the move he deliberately missed two flights to Manchester in a bid to scupper the deal.

His attempts proved futile and a deal was tied up shortly after.

Whether his desire to be almost anywhere else impacted his performances remains unclear, but it certainly appeared that way, scoring just four goals for City before leaving two years later for Blackburn Rovers.

A divisive name among the Wigan faithful, Zaki's attitude, rather than his talent, would lead to his demise for the Latics.

One of the few on this list who was never actually signed on a permanent basis, Wigan paid Zamalek £1.5million to take the Egyptian on loan for a season which saw both the good and the bad side of the striker.

Having bagged double digits in terms of goals before the new year, Zaki had the Wigan faithful salivating over the idea of keeping him around on a long-term basis.

However, things quickly turned sour, after he returned from international duty late four times, which lead to some pretty damning quotes from then-manager Steve Bruce.

"I just feel it’s time that we went public on just what a nightmare he has been to deal with," claimed the ex-Latics boss.

"I can honestly say that in all my time in football I have never worked with someone as unprofessional."

Zaki would spend the following season on loan at Hull, before fleeing to Turkey.

Africa's pin-up boy for the 2010 World Cup, Gyan put himself on the map with a string of stellar performances for Ghana on the biggest stage of all.

His heart-breaking penalty miss against Uruguay would prove crucial as his nation failed in their efforts to become the first African side to reach the final four of a World Cup.

To stay up to date with the latest football news, sign up to our newsletter here.

However, Sunderland did not let that deter them as they forked out £13m to lure Gyan from French outfit Rennes the very same season.

Having bagged 11 goals and five assists in his debut campaign, the striker was attracting all sorts of interest, thus causing him to lose focus at the Black Cats.

Seemingly a magnet for temperamental form players, Steve Bruce was Gyan's boss at the Stadium of Light, where he conceded "Anyone who has seen Asamoah play will know that he hasn’t been himself in recent months," before the Ghanaian would go on to pocket more than four times his Sunderland wage at UAE outfit Al Ain, spending just one season actually playing in front of the Sunderland faithful.

Heads are often turned when anyone swaps Bayern Munich for Blackburn, but that's exactly what Santa Cruz did after Mark Hughes paid the Bundesliga giants £3.5m for his services.

The striker had enjoyed eight years in Munich, but failed to ever hit more than five goals in a single season, meaning no one anticipated what was to follow when he finally turned out at Ewood Park.

19 goals in his opening campaign, Santa Cruz shocked everyone with how quickly he took to life in England, though it was to be a feat never repeated by the Paraguayan forward, who would fail to hit double figures in his following seasons in Europe.

His second season saw him find the net four times, but Hughes, who had recently joined Man City, remained keen on the striker and opted to bring him to the Eithad to the tune of £17.5m.

The deal proved to be a flop, with Santa Cruz bagging just three Premier League goals in City colours.

Though Johnson would spend much of his career in the Premier League, his exploits in 2004/05 were the kind of which are nearly impossible to recreate.

41% of his goals in England came in that campaign alone for Crystal Palace, only pipped to the golden boot by Arsenal's Thierry Henry.

21 league goals for Johnson sparked interest from Everton, who would save the forward from a long-term future in the Championship, as despite his best efforts the England international could not stop the Eagles from going down, finishing in 18th.

11 goals for the Toffees lead to questions over whether his form in front of goal had dried up, before he enjoyed a more productive spell at Fulham two years later.