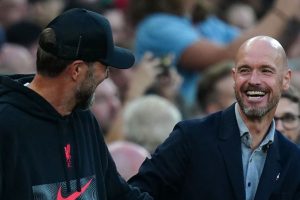 Liverpool's clash against Manchester United is one of the games selected for Premier League television coverage in March.

The top-flight confirmed the TV picks for the third month of the year on Wednesday afternoon, with several games now having new slots in the calendar. Chief among them is the second match of the season between Jurgen Klopp's Reds and Erik ten Hag's United, which will now take place on Sunday 5 March at 4:30pm.

It will form part of a Super Sunday double-header on Sky Sports, with Nottingham Forest hosting Everton at 2pm. The day prior will see Manchester City welcome Newcastle at 12:30pm on BT Sport, while Southampton will now take on Leicester at the revised time of 5:30pm on Saturday 4 March. Brentford host Fulham in that weekend's Monday Night Football.

READ MORE: Bookies pay out on Arsenal winning the Premier League with one punter earning £14k

What do you make of the latest round of TV picks? Let us know in the comments section.

Chelsea and Everton then face off at 5:30pm on the Saturday night in a game that is guaranteed to take place in its scheduled slot as both sides are already out of the FA Cup.

The same cannot be said of Brighton & Hove Albion vs Manchester United and Manchester City vs West Ham on Super Sunday the following day, with all four teams currently still in the FA Cup.

There will be no fixtures the following weekend, commencing 24 March, as the Premier League takes a back seat for the first time in 2023 due to the international break.