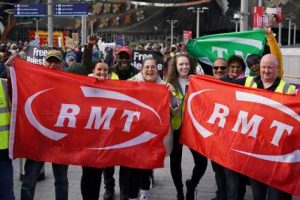 The top-flight is set to return from the World Cup break on December 26 with seven matches, but fans could struggle to attend fixtures around the country due to the rail disruption. The RMT union have confirmed additional strikes have been planned over the Christmas period, with Network Rail staff protesting over a pay dispute.

With a new offer set to be rejected, staff are now expected to walk out Christmas Eve and stay on strike until December 27. There are also four further 48-hour strikes scheduled.

Football supporters have been quick to react angrily on social media, with the Boxing Day schedule including Arsenal vs West Ham United and Aston Villa vs Liverpool.

Will you be attending a match on Boxing Day? Let us know in the comments section below.

Another added: "Well that’s Boxing Day football travel f***ed as well." A third also wrote: "Gonna have to sleep rough in London this Christmas to see the football on Boxing Day!"

The Premier League paused after matchday 16 across the weekend of November 12 and 13 as players met up with their national teams for the World Cup.

Clubs will return to action just eight days after the final with all 20 clubs playing across the three days after Christmas as part of a busy festive schedule. Three round of matches are scheduled between Boxing Day and January 4 before the FA Cup third round.

Elsewhere, the Championship, which paused for the group stage, will have a full schedule on Boxing Day, as will League One and League Two, which have continued throughout the tournament.