Porto vs Chelsea live stream: How to watch Champions League fixture online and on TV tonight 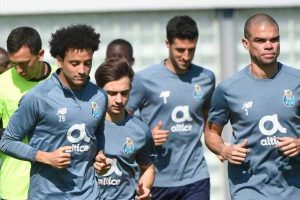 Chelsea and Porto begin their Champions League quarter-final this evening as they play the first leg in Seville.

Both legs of the last-eight tie will take place in the Spanish city on account of coronavirus-related travel guidelines, with tonight’s game acting as a ‘home’ fixture for Porto.

A semi-final with Real Madrid or Liverpool awaits the victors of this quarter-final, with Chelsea favoured due to their impressive start to Thomas Tuchel’s time as head coach. The German and his players were unbeaten in 14 matches since his arrival in late January, although that searing streak ended in stunning fashion last weekend as the Blues were defeated 5-2 at home by 19th West Brom in the Premier League.

Portuguese champions Porto, meanwhile, are on a three-match winning run since their 3-2 second-leg loss to Juventus in the Champions League last 16 – an extra-time result that ensured Sergio Conceicao’s side safe passage to the final eight because of their 2-1 first-leg victory. Chelsea, meanwhile, were 3-0 aggregate winners against Atletico Madrid in the last round.

Here’s everything you need to know about tonight’s game.

The match will kick off at 8pm GMT this evening.

The fixture will air live on BT Sport, with subscribers also able to watch it live on the broadcaster’s website and app.

Porto will be without Sergio Oliveira – who has scored 19 times across all competitions this term – with the midfielder having picked up one too many yellow cards, while Mehdi Taremi is also suspended for this game after his red card against Juventus. Malang Sarr is eligible to take on his parent club here, though the 22-year-old is unlikely to start.

N’Golo Kante should be fit in the Chelsea midfield, as should Christian Pulisic – despite the winger’s half-time exit against West Brom with an apparent injury. Thiago Silva’s sending-off in that game does not affect his eligibility tonight, but fellow centre-back Antonio Rudiger could miss out after his reported training ground clash with goalkeeper Kepa Arrizabalaga.

Porto were seen as the most favourable opponents for the other seven teams when the quarter-final draw was made, but they are no pushovers – as they demonstrated by eliminating Italian champions Juventus in the last round. That fact, coupled with Chelsea’s poor result against West Brom at the weekend, will give Blues fans cause for concern. But Chelsea still have the greater quality and depth, and that should at least be enough to secure a vital away goal and draw here, if not a win. Porto 1-1 Chelsea.