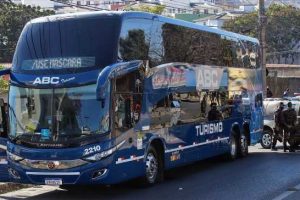 Brazilian police charged six Boca Juniors players and officials on Wednesday, a day after they were involved in clashes with rivals and police following their Copa Libertadores elimination by Atletico Mineiro.

Two were charged with damaging property and released after paying 3,000 reais ($574) bail each, the Minas Gerais state police said in a statement.

Four others from the Argentine club were charged with causing bodily harm and abusing authorities. They were released after “formally agreeing to appear before a judge” at a future date, the statement added.

None of the six were identified by name.

Boca, one of the biggest clubs in Argentina, were knocked out of the Libertadores, South America’s equivalent of the Champions League, on Tuesday evening at the Mineirao stadium in Belo Horizonte.

However, Boca had a goal disallowed in the second half after a long consultation with the video assistant referee (VAR).

The Argentine side also had a goal disallowed by VAR in the goalless first leg.

Angry Boca players and officials clashed with their rivals at the side of the pitch as the referee viewed the VAR monitor, and there was more trouble in the tunnel and dressing rooms after the final whistle.

Brazilian police used pepper spray against Boca players and officials at the door of their dressing room after the match, with videos showing the players choking as they shouted abuse at the law enforcement officers.